What is the summary of the poem `wind`?

i am not ssatrified to your answar
View Full Answer

The mixture of gases is called air and the fast blowing air is wind. The present poetry piece "Wind" has been composed by "Subramania-Bharti". The poet has drawn the living picture of wind which makes fun of the weak people or things. So he suggests to be strong physically and mentally.. Actually the wind is the symbol of difficulties or obstacles humans have to face for their survival. The poem can be summarized in following ways to prove the fact represented by Subramania Bharti: - ◘ Violence and destruction - Although the poet requests the wind to blow gently but it does not accept the plea. The wind blows violently and causes destruction. ◘ Result of storm - The wind breaks the shutters of weak windows. It scatters the papers and throws down books on the shelves. ◘ Fun of almighty wind God - The poet has regarded wind as God. He says that he makes fun of the weak persons and things. The fast blowing wind destructs weak houses, weak doors and weak bodies. ◘ Suggestion - Subramania Bharti suggests us to build strong houses and strong doors. We must be healthy physically and mentally. It will help the wind to be friend. To sum up the poem, people with strong physique and mind are able to stand and face odds or obstacles of life.

I am not satisfied with the answer.

Hope this will help 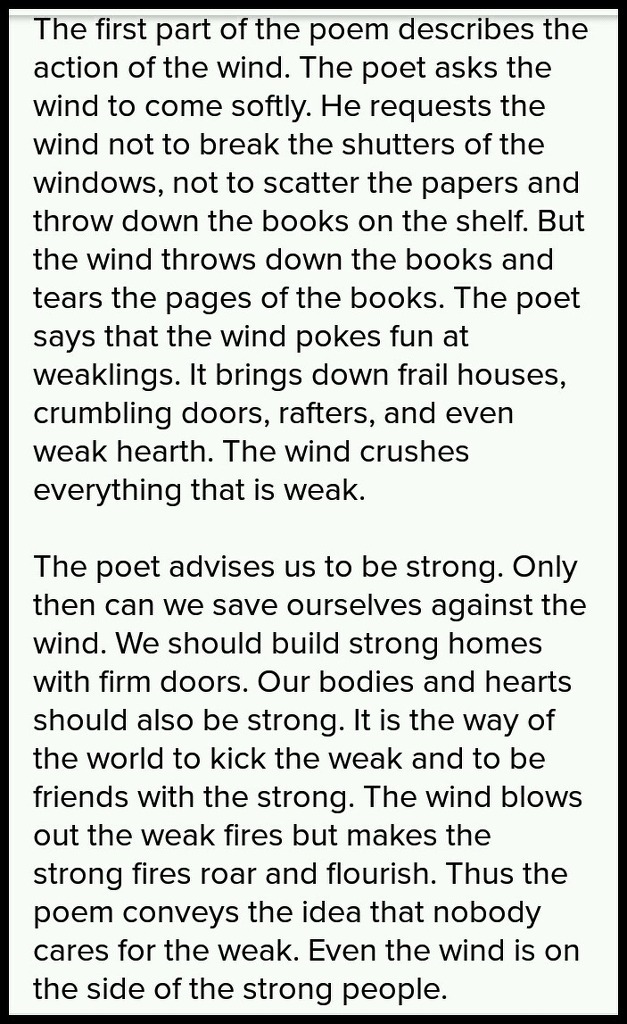 We all know that wind is a natural phenomenon. In this poem, the poet talks to the wind. The power of wind has been described and the poet says that wind is destructive. He has linked the destructive power of wind to the adversities of life and says that the weak people break down, but stronger people emerge out of adversities, stronger. ?The poem gives an important message that we should be mentally tough and physically strong in order to survive the hardships of life. A weak person breaks down like a weak building and crumbles.We must make these destructive forces our friends, with our strength and determination.

The first part of the poem describes the action of the wind. The poet asks the wind to come softly. He requests the wind not to break the shutters of the windows, not to scatter the papers and throw down the books on the shelf. But the wind throws down the books and tears the pages of the books. The poet says that the wind pokes fun at weaklings. It brings down frail houses, crumbling doors, rafters, and even weak hearth. The wind crushes everything that is weak.
The poet advises us to be strong. Only then can we save ourselves against the wind. We should build strong homes with firm doors. Our bodies and hearts should also be strong. It is the way of the world to kick the weak and to be friends with the strong. The wind blows out the weak res but makes the strong res roar and flourish. Thus the poem conveys the idea that nobody cares for the weak. Even the wind is on the side of the strong people.

In first part of the poem the poet tells the wind to blow slowly and gently don't hurt anyone .in second he says that wind is clever it only teases the weak person in next para he says that we can protect ourselves by building our house strong and join the gates firmly .and we have to make our hearts strong and powerful to survive by taking these measures the wind will become our friend and it will not tease us .It only teases weak persons if we are strong nothing can harm us at all

The Sound of Music divides into two parts. Each part focuses on two musicians, Evelyn Glennie and Bismillah Khan. Part one throws light on Evelyn?s life and struggles to become a successful musician. Students will learn that she is a multi-percussionist. She has the talent to play hundreds of instruments perfectly. It tells how she gained international recognition.

What?s interesting is the Evelyn is profoundly deaf. The musician learned to listen to music through her body and not ears. She does not hear music, she feels it. You will learn that was 11 years old when she found out she had trouble hearing. Nonetheless, that did not stop her from pursuing her career in music.

Thus, her teacher, Ron Forbes was the one to recognize her talent. He unlocked doors to her potential and helped her achieve the impossible. She is now one of the most renowned names in the music industry. She has many accolades and awards to her name and serves as a great inspiration to the specially-abled community.

Next comes part II, where we learn about Bismillah Khan as well as the origin of shehnai. It was Bismillah Khan who popularized this instrument and took it to the world stage. He broke the myth of shehnai not being capable to create independent tunes. He came from a family of musicians.

Further, Bismillah Khan had a very secular upbringing. He grew up practising on the banks of River Ganga. He went to the mosque as well as the temple. After achieving immense success, he was awarded various titles. He is also a recipient of the highest civilian award of India- The Bharat Ratna.

In addition to that, he has won all three awards of Padma Bhushan, Padmashree and Padma Vibhushan. Interestingly, he was the first person to be invited to play shehnai at the Red Fort in 1947, while greeting Independent India.

Most importantly, he represented India on the international stage as well. An auditorium in Tehran is also by his name. Moreover, despite many opportunities, Bismillah Khan never left his home-town Varanasi. He dedicated his life to music and passed away in 2006.

Wind Summary –
As the name suggests this poem is about wind. However, the wind is a natural phenomenon. And in the poem, the poet describes the power of the wind and calls wind destructive. Further, he links the destructive power of the wind with the difficulties of life. He says that weak people breakdown easily, but stronger people emerge out stronger. Also, the poem gives a very important lesson that we should be mentally tough and physically strong to survive the hardships of life. However, a weak person crumbles and breakdown like an old building. So we must make these destructive forces our friends with our determination and strength.