Why do stars twinkle?

Explain why the planets do not twinkle?

Why does the Sun appear reddish early in the morning?

You can also refer to the following links:

Shubham The Unbeatable answered this

Twinkling of celestial bodies is caused by the scattering of light in the earth’s atmosphere. The stars appear as twinkling point sources of light because they are very far from earth.
Planets are very close to us as compared to the distance between stars and earth. They appear as small discs of light (the reflected light from the sun). Each tiny point in this disc can be considered as point sources of light. These different points produce either brighter or dimmer effect in such a way that the average of brighter and dimmer effect is zero. Hence, the twinkling effects of the planets are nullified and they do not twinkle.
In a very turbulent weather a planet may appear to twinkle because of the disturbance in the air through which the light is travelling.

l(i) light passing through atmosphere bends.so the light appear slightly higher they are actuaaly due to atmospheric ariation they do not appear stationary ,but there is fluctuation in its position.these also causes increase or decrease in the luminious flux of star light entering our eye.therefoore these causes twinkling of star?

(ii) planets being larger size can be taken as a colection of large no. of pint sized oject/sources of light , which nullify the twinkling effect of each other.therefore planets do not twinkle.

sun rays have to travel through a larger atmospheric distance. as wave length of blue is less then wave length of red,most of blue light and shorter wavelength are removed by scaterring.only red colour which is least scattered  is recieved by our eye and appear to come from sun. hence the appearance of sun at sunrise ,full moon near horizon may look almost reddish.hence sun appear reddish in early morning

1) Stars twinkle because of atmospheric refraction.Starlight on entering the earth's atmosphere it undergoes refraction before it reaches the surface of the earth.Since the atmosphere bends its light towards the normal, the position of the starlight changes.And even the position of starlight keeps changing.And stars are far away from earth and it is a point sized source of light.

2) Planets do not twinkle because it is very near to the earth.They are thus seen as extended sources.There are large number of point sized sources of light when we consider a planet.From all these sources entering our eyes, the average will be 0.

3) The blue colour and other shorter wavelenghts are scattered away by particles.The light of longer wavelength reaches our eyes.Thus the RED COLOUR is the one which has longer wavelenght compared to other colours.And even REDtravels longer distance.Thus it gives rise to a reddish appearance of the sun at the time of sunrise and sunset in the sky. This is the appearance of sun during sunrise and sunset

Light coming from the stars undergoes refraction on entering the Earth’s atmosphere. This refraction continues until it reaches the Earth’s surface. This happens because of uneven heating of atmospheric air. Hence, the atmospheric air has changing refractive index at various altitudes. In this case, starlight continuously travels from a rarer medium to a denser medium. Hence, it continuously bends towards the normal.

The refractive index of air medium gradually increases with a decrease in altitude. The continuous bending of starlight towards the normal results in a slight rise of the apparent position of the star.

Since the physical conditions of the Earth’s atmosphere keeps changing, the apparent position of the star is not stationary. The star changes its position continuously, which makes it twinkle. This happens because starlight travels a very large distance before reaching the observer. However, the path varies continuously because of uneven atmospheric conditions. Hence, the stars seem to be fluctuating, sometimes appearing brighter and sometimes fainter. All this together, gives rise to the twinkling effect of stars.

because the planets are near to us than the stars and while the light is getting reflected the area of planet is more so the reflection is cross ccut by each other and in case o fstars they are point szed and reflection is maximum. the color of sun in sunrise is red. this is because during sunrise the sun is near horizon and hence light has to cover maximum distance to reach our eyes due to which all the other colors except red light gets scattered in atmosphere and hence only red light reaches our eyes and gives us the sensation that sun is red 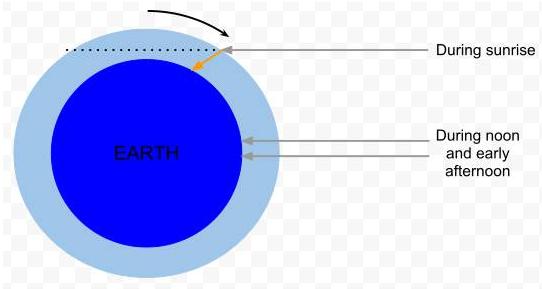 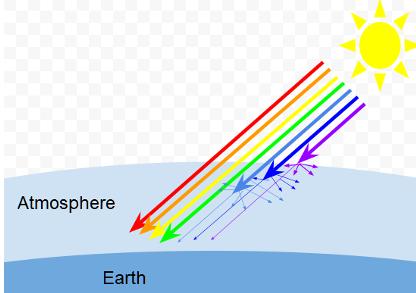 During the sunrise also in the sunset, the sun rays has to travel a greater distance through the atmosphere because of being slanted. In the solar spectrum the colors having higher wavelengths like red do not scatter much but the shorter wavelength like violet, blue etc, get scattered easily. So in case of sunrise, when the rays that has to travel a longer distance, the smaller wavelengths like blue, violet, green etc are scattered off in the upper atmosphere and the ray reach earth consists of longer wavelengths of orange and red. Thus, sky appears reddish.