Mitosis has been described in the diagram given below: 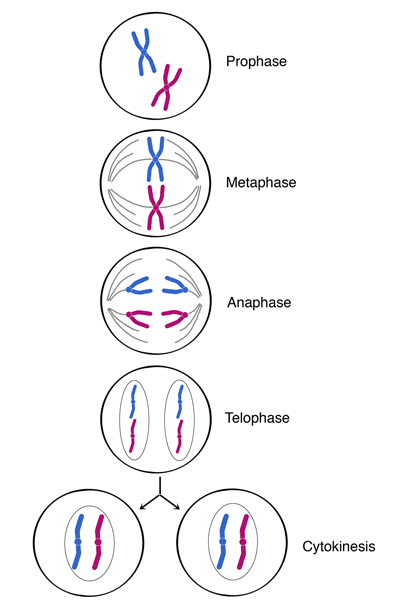 Mitosis is the mode of cell multiplication which occurs to increase the number of cells with no change in chromosome number or ploidy of the cell. It occurs in all the SOMATIC CELLS (cells of body not involved in sexual reproduction) for their growth and repair and also in gametes in initial stages to increase their number.

Mitosis is a type of cell division in which single haploid cell (n) or diploid cell (2n) divides into two haploid or diploid daughter cells that are same as the parent.

Mitosis occurs in somatic cells of plants and animals. In this cell division, the two daughter cells have the same number of chromosomes as that in the parent cells.

It is the first visible stage in karyokinesis. The chromosomes appear as long coiled threads called chromatids. The chromatin becomes shorter, thicker and visible due to the condensation of DNA. The chromatins are now called chromosomes. Stainability of nucleus increase. Each chromosome starts to splits longitudinally into two sister chromatids. These sister chromatids are attached to each other at the centromere. The nuclear membrane and nucleolus start to disappear and by the end, it will be completely disappeared.

Nuclear membrane and nucleolus completely disappears and simultaneously appearance of spindle fibres. Spindle fibres are attached to the centromere of a chromosome. The chromosomes are arranged on the equatorial plane. The process of gathering of chromosomes in equator is called congression and plate formed is called metaphasic plate.

The centromere of each chromosome splits into two sister chromatids and forms two daughter chromosomes. The daughter chromosomes are pulled towards the poles due to the contraction of spindle fibres and stretching of interzonal fibres. During polar movement, the chromosomes show different shapes i.e. J, U, V, L or I shaped in appearance. At the end of anaphase, each pole will get one set of daughter chromosomes. It is the shortest phase and is also known as a migratory phase.

Two nuclei are formed at the end of telophase. Both the nuclei have the same number of chromosome as the parent cell. It is the last visible stage of karyokinesis and is also known as reorganization phase.

It is followed by cytokines or division of cytoplasm.