With reference to the above diagram of E. coli cloning vector pBR322, answer the
following questions.
In E. coli cloning vector pBR322, a foreign gene segment is to be introduced into the
ampR region. From the restriction enzymes given below, which one of you would
probably use and why? Bam HI, Sal I, Pvu II, Eco RI.
Highlight the reasons for why you could not choose the remaining restriction enzymes
for your work.
How will the insertion of this enzyme aid in recombinant DNA technological process? 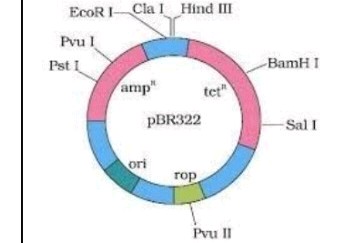 Dear student,
It seems that some information is not correct in the given question. However, I have answered according to my knowledge of this topic. Please find below the answer:

In E.coli cloning vector pBR322, if the foreign gene segment is to be introduced into the Ampr region, the restriction enzyme that can be used is Pvu I (which is not present in the given options). This is because the restriction site for this enzyme is present within the gene coding for ampicillin resistance. Any other enzyme-like Bam HI, Sal I, if inserted, will lead to insertional inactivation of ampicillin resistance coding gene which is later used in the process for identification of transformant and recombinant.

The restriction enzyme cuts DNA slightly away from the centre of the palindrome sites but between the same two nitrogen bases on the opposite strands of the DNA. This is done so that the single-stranded unpaired bases which are formed at cut ends will be left to forms hydrogen bonds with their complementary cut counterparts. The ends formed after the action of this restriction enzyme are called sticky ends. These further help in the action of enzyme DNA ligase to join the two strands.

Hope this clears your doubt.
Regards.