working of an LC oscillator 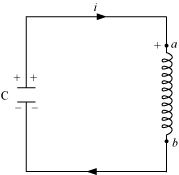 According to Kirchhoff’s loop rule,

This equation is of the form of a simple harmonic oscillator equation.