Write the character sketch of Nelson Mandela in about 200 words

nelson mandela was the revolutionary  politician who had fight against the policy called apartheid . he was the first black who became the president in 1994 till 1999 . he was fully elected by the people. his government mainly focuses on dismanteling the apartheid . he served as a president of ANC(African  national congress ) .

my cpslk key was not working properly sorry for mistake

Nelson Mandela was the tallest of all the black heroes who waged a relentless fight against the racial-regime in South Africa. He suffered untold sufferings and tortures in prison but led the country to install the first democratically elected government in South Africa.

He is grateful in acknowledging the unimaginable sacrifices of thousands of black heroes for the freedom of their people.

He had a wider vision of humanity. For him, freedom was comprehensive and couldn’t be divided.

Nelson Mandela is a great patriot. He loves his country and countrymen. For him, the greatest wealth of South Africa is her people.

He has a sacrificing nature. He sacrificed his life of comfort, family and home and plunged into the struggle for freedom. He believes in equality for all. He opposed the rule of Apartheid for which he was declared an outlaw. He was oppressed and tortured in jail for several years but he never broke. It shows his traits of tolerance, courage and perseverance.

hope it was useful to you

Tires looking to piss get Chapman send it to

Nelson Mandela, the first Black president of South Africa, after more than 3 centuries of white rule, celebrated very vividly the grand ceremony of the first democratic non-racial government. Being sworn in, he said radiantly that “Never, never again shall it be that this beautiful land will again experience the oppression of one by another”. He pays homage to the freedom fighters like Oliver Tambo, Luthuli, Yusuf Dadoo. They were men of uncommon courage, wisdom and generosity. He regards the death of thousands of people who sacrificed their lives for the cause of courage. It is not the absence of fear but the victory over it. No man is born with harassment rather love which comes natural to the human heart. He says every man has his duties to his family, to the community and to his country to perform honestly.

Nelson Mandela was first nigro president of south Africa.before became a president he was a speaker of nigro movement which was running more year 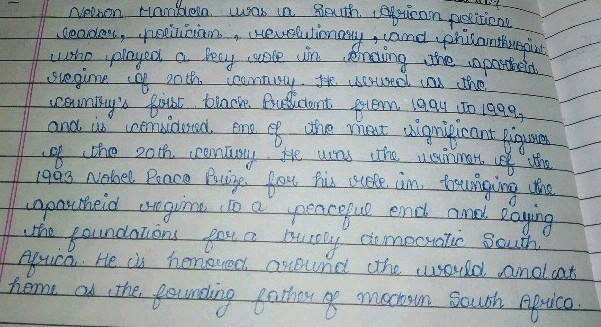 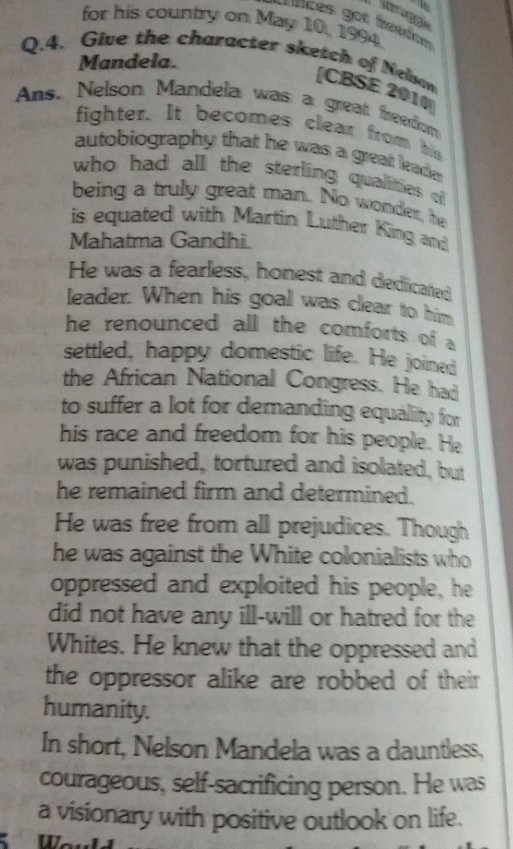 He is a black man.
He is south african.
He is the first president of South Africa.

Character sketch of Nelson Mandela in about 250 word
What are you looking for?