write the formation of sodium chloride and mg cholide

Sodium chloride can be formed as per the following equation

The lewis dot structure is as follows 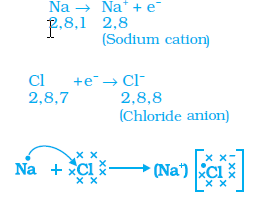 Magnesium chloride can be formed as follows

lewis dot structure for the same is

Sodium chloride is an easily soluable salt, so when it is mixed into water, it will turn into chloride and sodium ions. Reversibly, when the water is evaporated from a solution containing sodium and chloride ions, sodium chloride will form.

An example of the formation of sodium chloride is when the strong base sodium hydroxide (NaOH) and the strong acid hydrochloric acid (HCl) are mixed into the same solution, which is then evaporated:

if you just want to make magnesium chloride, you could just react magnesium with hydrochloric acid: