For example, the movement of organs like leaves and petals that are directed by the touch as in the leaflets of touch me not plant, wherein the plant droops when touched from any side.
The various kinds of nastic movements shown by plants are:

Thigmonasty:
It is the movement of a plant in reponse to an external stimuli like touch, vibration etc. For example, Mimosa plant responds by "folding up of leaves" when touched. The sensitive part of the plant involved in this type of movement is called pulvinus which is a soft, swollen structure present at the base of the leaf.

Photonasty:
Some plants show movement in plant part in response to the light. For example, flowers of sunflower and lotus open in morning.

Do you know which organs make up the nervous system?

The nervous system is made up of the brain, spinal chord, and nerve cells or neurons.

Let us first study about the structure of the functional units of the nervous system i.e., the neurons. 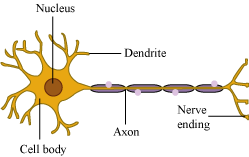 Structure of a neuron