Therefore, we can define vector quantity as the physical quantity that requires both magnitude and direction to be described.

Position vector of a point in a coordinate system is the straight line that joins the origin and the point. 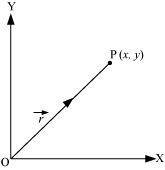 Magnitude of the vector is the length of the straight line and its direction is along the angle θ from the positive x-axis.

Displacement vector is the straight line joining the initial and final positions. 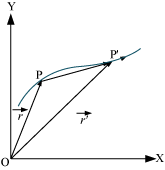 are said to be equal, if and only if they have the same magnitude and the same direction.

Calculus is basically a way of calculating rate of changes (similar to slopes, but called derivatives in calculus), areas, volumes, and surface areas (for starters).

It’s easy to calculate these kinds of things with algebra and geometry if the shapes you’re interested in are simple. For example, if you have a straight line you can calculate the slope easily. But if you want to know the slope at an arbitrary point (any random point) on the graph of some function like x-squared or some other polynomial, then you would need to use calculus. In this case, calculus gives you a way of “zooming in” on the point you’re interested in to find the slope exactly at the point. This called a derivative.

If you have a cube or a sphere, you can calculate the volume and surface area easily. If you have an odd shape, you need to use calculus. You use calculus to make a infinite number or really small slices of the object you’re interested in, determine to sizes of the slices, and then add all those sizes up. This process is called integration. It turns out that integration is the reverse of derivation (finding a derivative).

In summary, calculus is a tool that lets you do calculation with complicated curves shapes, etc. that you would normally not be able to do with just algebra and geometry.

Differentiation is the process of obtaining the derived function f′(x) from the function f(x), where f′(x) is the derivative of f at x.

The derivatives of certain common functions are given in the Table of derivatives,