The total cost of producing x units of a commodity consists of two parts:
(i) Fixed Cost
(ii) Variable Cost
Fixed Cost: It is the sum of all costs that are independent of the level of production.
Fixed cost remains constant at all levels of production and it generally includes rent, depreciation, insurance and interest etc. 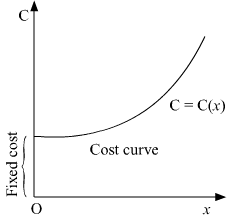 Demand Function: The quantity demanded of a given commodity depends upon several variables such as the price of the commodity, prices of the substitutes and complements, disposable income, wealth, tastes, habits, etc. However, in elementary economics analysis, demand is considered dependent on the commodity price. We will assume that the quantity demanded depends on the price only.

Usually, as the price increases, demand decreases and due to a decrease in price demand increases. Therefore, the demand curve is always decreasing as shown below: 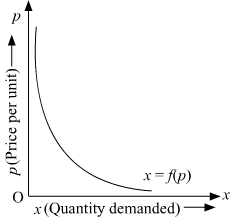