Our daily life is filled with geometry—the pure mathematics of points, lines, curves and surfaces. We can observe various shapes and angles in the objects that surround us. Observe, for example, this table and its rectangular surface; the boomerang and its angular shape; the bangle and its circular shape.

Euclid, an ancient Greek mathematician, observed the various types of objects around him and tried to define the most basic components of those objects. He proposed twenty-three definitions based on his studies of space and the objects visible in daily life. Let us go through this lesson to learn each of Euclid’s definitions. 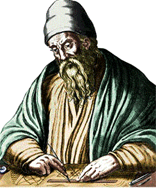 Euclid of Alexandria(325 BC−265 BC) was a great Greek mathematician. He is referred to as ‘the father of geometry’. Euclid taught at Alexandria during the reign of Ptolemy I, who ruled Egypt from 323 BC to 285 BC. Euclid wrote a series of books which are collectively known as the Elements. It is considered one of the most influential works in the history of mathematics. The Elements served as the main textbook for teaching mathematics (especially geometry) from the time of its publication up until the early 20th century. The principles in this treatise were derived by Euclid from a small set of axioms that are now referred to as Euclidean geometry.

The Elements is a great collection of basic geometrical concepts and ideas. The content in it is based on the works of a few great mathematicians, including Pythagoras, Thales, Plato, Aristotle, Eudoxus and Menaechmus. This work had been the most commonly used and the premier source of geometrical concepts for over 2000 years since its publication. It is believed to be the most translated, published and studied book after the Bible in the western world.

Definitions Given by Euclid

Euclid gave the definitions of a few very basic attributes of objects that are normally around us. These definitionsare listed below.

1. A point is that which has no part.

2. A line is a breadth-less length.

3. The extremities of a line are called points.

4. A straight line is one that lies evenly with the points on itself.

5. A surface is that which has length and breadth only.

6. The edges of a surface are lines.

7. A plane surface is one that lies evenly with the straight lines on itself.

8. A plane angle is the inclination to each other of two lines in a plane, which meet each other and do not lie…