Surface Areas and Volumes of Solids

Observe the water tanks given below.

How would you decide which one is bigger?

We can do that by observing the space occupied by them or by comparing the maximum quantity of water they can hold.

The space occupied by a solid shape is its volume, while the maximum quantity of liquid that it can hold shows its capacity.

We can also say that the capacity of a solid is equal to its volume.

Let us learn the concept by finding the volume of a cube.

When each side of a cube measures 1 cm, the space occupied by it i.e., its volume is said to be 1 cubic centimetre. This unit is written as c.c. or cm3, which is the fundamental unit of volume. This cube is called the unit cube of side 1 cm.

Now, let us use some unit cubes to a make a bigger cube.

Similarly, we can find the volumes of different cubes or cuboids by virtually breaking them into unit cubes.

By using the small cube in figure (a), find the volume of the solid in figure (b).

It can be observed that the solid in figure (b) consists of 18 cubes like that in figure (a).

By using the small cube in figure (a), find the volume of the solid in figure (b). 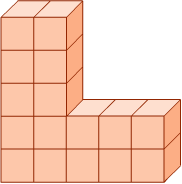 Volume of the smaller cube in figure (a) = a3 cubic units

It can be observed that the solid in figure (b) consists of 16 cubes like that in figure (a).

Surface Areas of a Cube and a Cuboid

We give gifts to our friends and relatives at one time or another. We usually wrap our gifts in nice and colourful wrapping papers. Look, for example, at the nicely wrapped and tied gift shown below. 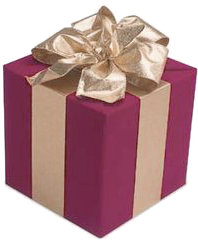 Clearly, the gift is packed in box that is cubical or shaped like a cube . Suppose you have a gift packed in a similar box. How would you determine the amount of wrapping paper needed to wrap the gift? You could do so by making an estimate of the surface area of the box. In this case, the total area of all the faces of the box will tell us the area of the wrapping paper needed to cover the box.

Knowledge of surface areas of the different solid figures proves useful in many real-life situations where we have to deal with them. In this lesson, we will learn the formulae for the surface areas of a cube and a cuboid . We will also solve some examples using these formulae.

Formulae for the Surface Area of a Cuboid

Consider a cuboid of length l, breadth b and height h.

The formulae for the surface area of this cuboid are given as follows:

Two mathematicians named Henri Lebesgue and Hermann Minkowski sought the definition of surface area at around the twentieth century.