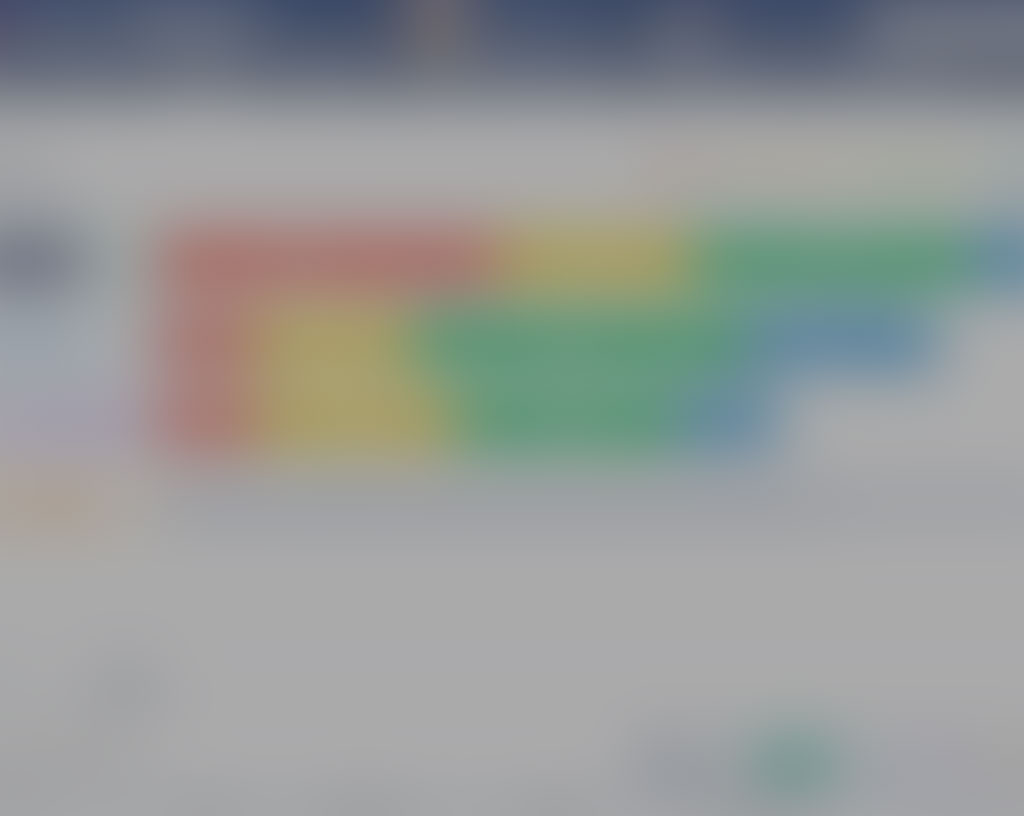 Yamini did a project 'Animals and Birds'. She asked each child of her class about one favourite pet animal.
She used tally marks to record each answer. For example if someone said 'cat' she put one line | in front of 'cats'. When someone said 'cat' again, she added a line. So

means 5 cats. In all 24 children said 'cat' was their favourite animal. Help Yamini complete the table. 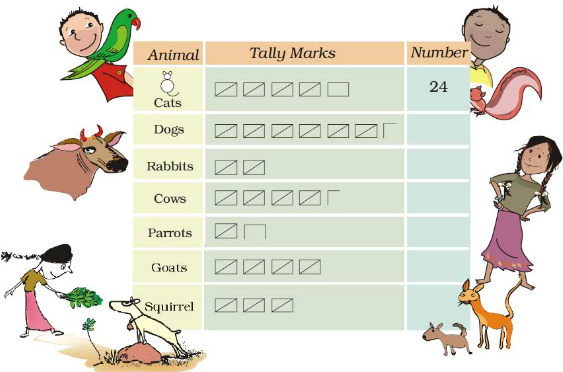 • Look at the tally marks and write the number for each animal in the table. How many children in all did Yamini talk to?
• Which is the most favourite pet animal in this table?
• Which pet will you like to have? What will you name it? Which other animals can be kept at home? Discuss. 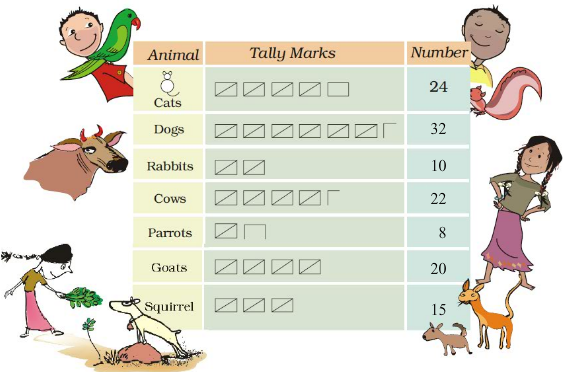 • Dog is the most favourite pet animal.

• I would like to have a dog. I will name it Bruno. The other animals that can be kept at home are cats, rabbits, parrots, etc.

Disclaimer: The answer of the third part may vary from student to student. The answer provided here is only for reference. 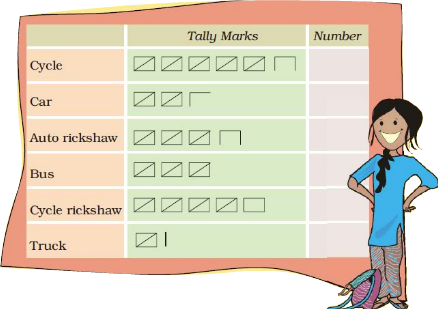 • Write the number of each vehicle in the table.
• How many vehicles in all did Sumita see on the road in half an hour?
• Auto rickshaws are thrice the number of trucks — true/false?
• Make tally marks for 7 more buses, and 2 more trucks. 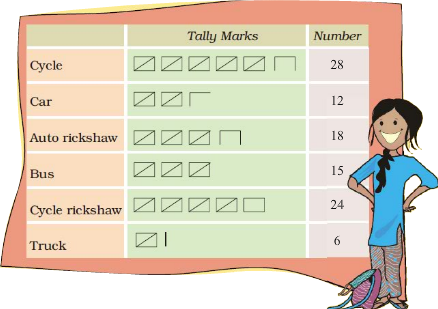 Now you can fill the chapati chart to show the numbers given in the table. 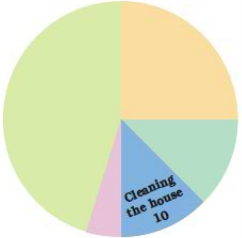 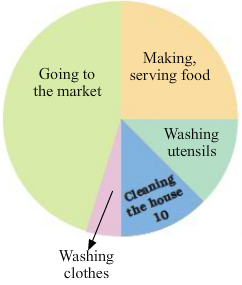 Ask 10 of your friends about what they like to do most after school.


Disclaimer: The answer may vary from student to student. The answers provided here are only for reference.

These are two bar charts. These show the highest temperature (in degrees Celsius) in four cities, on two different days. The cities are Delhi, Shimla, Bangalore and Jaisalmer. 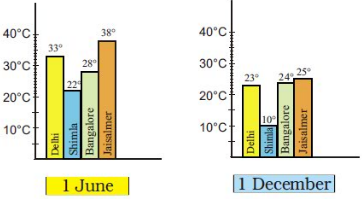 • We find from the bar chart that Jaisalmer has the maximum temperature of 38 ∘C on 1 June. Thus, Jaisalmer is the hottest city on 1 June.

• We find from the bar chart that Shimla has the minimum temperature of ​10 ∘C on 1 December. Thus, Shimla is the coldest city on ​1 December.

Earlier there were no rabbits in Australia. Rabbits were brought to Australia around the year 1780. At that time there were no animals in Australia which ate rabbits. So the rabbits began to multiply at a very fast rate. Imagine what they did to the crops!
The table shows how rabbits grew every year.

Madhav went to a wedding along with his parents. He met many relatives there. But he didn't know everyone. He met his mother's grandfather, but found that her grandmother is not alive. He also found that her Dadi's mother (grandmother's mother) is still alive, and is more than a hundred years old.
Madhav got confused. He couldn't imagine his mother's grandmother's mother! So, Madhav's mother made a family tree for him — 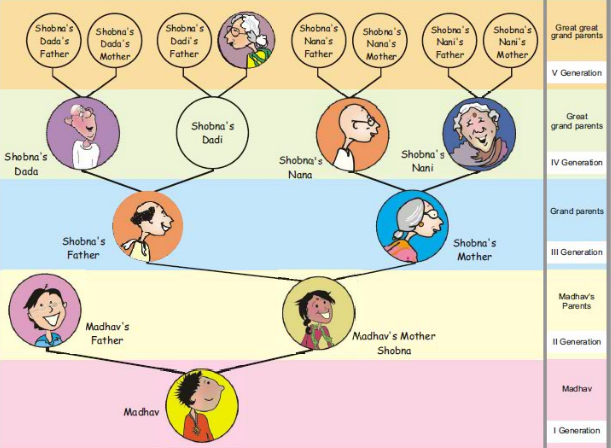 Madhav's mother helped him understand her family with the help of this drawing. You can also find out about your older generations using such a family tree.

(2)
Madhav has 8 ​great, great grandparents in all.

Thus, in the IX generation, number of elders in Madhav's family will be 128.

Amit sowed a few seeds of moong dal in the ground. The height of the plant grew to 1.4 cm in the first four days. After that it started growing faster.
Amit measured the height of the plant after every four days and put a dot on the chart. For example if you look at the dot marked on the fourth day, you can see on the left side scale that it is 1.4 cm high.
Now look at the height of each dot in cm and check from the table if he has marked the dots correctly. 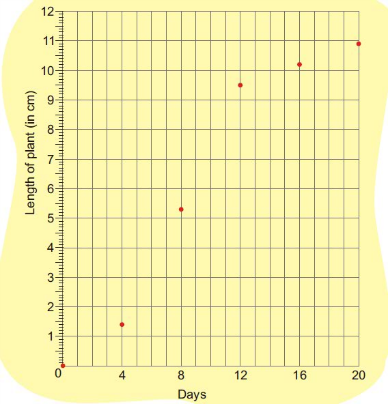 Yes, he marked the dots correctly.

(c) Disclaimer: The answer may vary from student to student.