What was the length of the smallest pencil you have used?
How long is this pencil? Guess ________ cm
Measure it using a scale. How good is your guess?
We can see that Anju used a lens to make it look bigger.

The smallest pencil that I had used was about 1 cm long.

I think the given pencil is more than 3 cm.

With the help of scale, the length of the pencil comes out to be 3.6 cm.

So, my guess was correct.

Disclaimer: The length of the smallest pencil that you have used varies from student to student. The answers provided here are for reference only.

It is the same as 9 millimetres.

(3) Using the scale on this page find the difference in length between candle 1 and candle 3.

Guess the lengths to draw these things. Ask your friend to draw the same. After you make the drawing use a scale to measure the length. Whose drawing showed a better guess?

Disclaimer: Students are advised to prepare the answer on their own.

Which line is longer? A or B? Measure each line and write how long it is in centimetres. How good is your guess?

Which line is longer? C or D? Measure each line. How good is your guess?

I think line B is longer than line A.
With the help of ruler, we get the measurement of line A as 4.6 cm and line B as 4.6 cm.
That means, both the lines are of same length. So, our guess was incorrect.

Disclaimer: The guess may vary from student to student. The answers provided here are for reference only.

What is the length of a 100 rupee note? Guess. Now measure it using a scale.

Now guess the length and width of many other things. Measure and find the difference between your measure and your guess.

Match each yellow box with one green and one pink box. 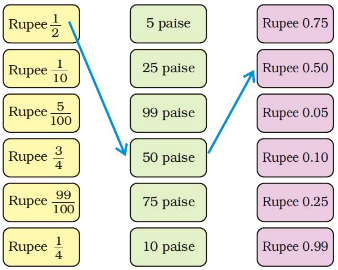 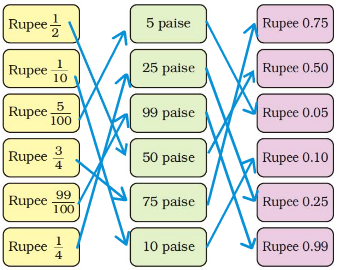 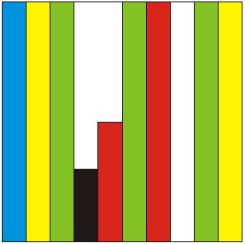 Total number of strips in the sheet = 10
Number of blue coloured strips = 1
So, part of the sheet that is blue =
Thus, of the sheet is blue.

Thus, of the sheet is yellow.

Look at the second sheet. Each strip is divided into 10 equal boxes. How many boxes are there in all? 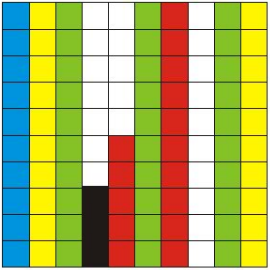 It is given that of the sheet is black.
Now,

There are a total of 22 white boxes in the sheet.

So, part of the sheet that is white =

The school at Malappuram has its sports day.
The first five children in the Long Jump are: 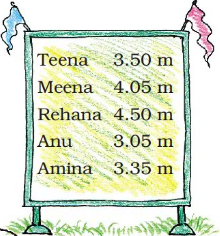 Thus, Rehana is the winner in the long jump.

Shivam Bank has a chart to show us how many Indian rupees we can get when we change the money of different countries.

(A) The money of which country will cost the most in Indian Rupees?
(B) Mithun's uncle in America had sent him 10 USA dollars as a gift. Mithun used 350 rupees for a school trip. How much money was left with him?
(C) Majeed's father is working in Saudi Arabia. He gets 1000 Saudi Riyal as salary. Arun's father who is working in Sri Lanka gets 2000 Sri Lankan Rupees. Who gets more Indian rupees as salary?
(D) Leena's aunty brought a present for her from China. It cost 30 Yuan. Find what it costs in Indian rupees.
(E) Astha wants some Hong Kong Dollars and Won.
(1) How many Won can she change for Rs 4? For Rs 400?
(2) How many Hong Kong Dollars can she change for Rs 508?

(A) The money of England will cost the most in Indian Rupees as 1 pound is equal to Rs 77.76

(C)  Here, we are considering the exchange rates of Dirham in place of Saudi Riyal.
Salary of Majeed's father = 1000 Dirham

We find from the chart that,

Kiran went shopping with Rs 200. Look at the bill. The shopkeeper forgot to put the point correctly in the prices. Put the point in the correct place and find out the total amount of the bill. 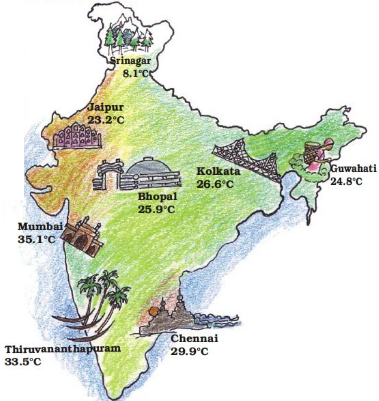