If somebody calls you from behind, you will quickly turn around. What makes you do so?

How do you realize that an alarm bell is ringing?

So, what is sound?

Sound is a form energy that produces the sensation of hearing in our ears and vibrating bodies produce sound.

Do you know how a sound is produced? To find out, let us perform the following activities.

Take a cooking utensil and pour some water in it. Now, beat the utensil with a rod. You will hear a sound. Carefully, observe the surface of water in the utensil. Do you see concentric circles moving on the water surface? These are vibrations in water, produced by vibrations of the utensil body, on beating.

Therefore, it can be concluded that a vibrating body produces sound.

The back and forth movement of an object produces sound. An object moving back and forth is said to be in vibration. Hence, sound is produced by vibrating objects.

Production and Propagation of Sound: An Overview

An age-old philosophical question goes something like this: ‘If a tree falls in the woods and there is no one to hear it, does it make a sound?’ Common sense tells us, ‘Yes, it does make a sound.’ But what about sound itself? What is it? How is it produced? And how does it reach our ears?

This lesson will introduce you to the basics of sound.

The rattlesnake, commonly found in the deserts of the United States, makes a loud rattling sound by using its tail. It produces this sound by beating the tail rapidly on the ground. This sound is generally produced in order to ward off its enemies. 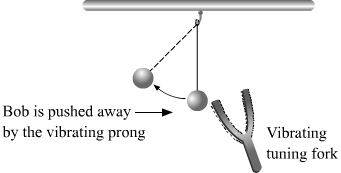 Take a tuning fork, a rubber hammer and a bob with a thread attached to it. Suspend the bob from the ceiling by the thread. Strike a prong of the fork with the rubber hammer. The tuning fork will start to vibrate. Bring it close to your ear. Do you hear any sound? Bring one of the vibrating prongs in contact with the suspended bob. This will cause the bob to be pushed away and start oscillating. Can you say why?

This activity helps us conclude that the tuning fork vibrates to produce sound. Any vibrating object can produce sound. Sound can be produced by plucking a stretched string, scratching a rough surface, rubbing our hands together and by blowing an object. Our voices are the result of the vibrating vocal cords present in our throat. The sound of the guitar is the result of the vibrations of its plucked strings.

A bicycle bell stops ringing when you cover it with your hands. Can you say why?

When you cover a ringing bicycle bell with your hands, the sound energy is transferred from the bell to your hands. As a result, the bell stops vibrating. Consequently, the ringing sound stops.

Sound is a form of energy that is produced when an object or a membrane vibrates to and fro about a mean position. Therefore, we can produce a sound by producing vibrations in an object. These vibrations create sound waves which travel through a medium (air, water, etc.) before reaching our ears. 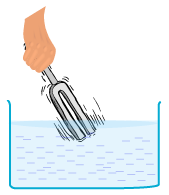 The phenomenon of sound wave propagation has two main features. These are:

Air is the most common medium through which sound travels. When you beat a drum, the neighbouring air particles are set into vibration. As they move forward, they push the air particles in front of them. Consequently, a high-pressure region called compression (C) is created. As the vibrating air parti…