Some Compounds of Non-Metals

Preparation and Properties of Dinitrogen and Ammonia – Group B

The composition of ammonia was determined by Claude Berthollet in 1785.

In the free state, ammonia is found in air and natural water.

In the combined state, it is obtained by destructive distillation of coal or wood. Also, it is found on the sides of craters and fissures of lava of volcanoes.

Ammonia can be prepared by the following methods.

In this method, the mixture of ammonium chloride and dry calcium hydroxide is placed in a round-bottomed flask. It is clamped to an iron stand so that its neck is tilting downwards. This stops water vapours formed by condensation to trickle back into the hot flask.

The vapour density of ammonia is 8.5. Therefore, it is lighter than air. Thus, it is collected by downward displacement of the air. Also, since ammonia gas is extremely soluble in water, it cannot be collected over water.

In this method, magnesium nitride is placed in a conical flask. Warm water is allowed to trickle on it. This evolves moist ammonia gas.

The ammonia gas contains water vapours as impurities. The water vapour has to be removed as ammonia gas is extremely soluble in water. Hence, it is passed through drier containing quicklime.

The vapour density of ammonia is 8.5. Therefore, it is lighter than air. Thus, it is collected by downward displacement of air. Also, since ammonia gas is extremely soluble in water, it cannot be collected over water.

The following reactions take place when water reacts with sodium and magnesium nitride.

By dissolving ammonia in water, an aqueous solution of ammonia is obtained. Take water in a container and dip a small portion of the mouth of the funnel in water. 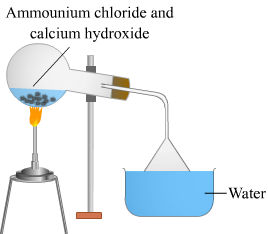 The level of the water decreases when ammonia dissolves in water at a higher rate than that of its production.

The water rushes into the funnel due to the decrease in the pressure above water level and this results in loss of contact between water and the rim of the funnel.

The funnel comes in contact with water again as the water is pushed down by the ammonia produced. This is how ammonia dissolves in water without a back suction.

A mixture of hydrogen and nitrogen gases in the ratio 3:1 is taken in the compressor. It is then compressed from 200 atm to 900 atm pressure and passed over the heated catalyst in catalyst chamber. The mixture is maintained at a temperature between 450 − 500°C. In the condenser, the hot mixture of ammonia gas and unreacted hydrogen and nitrogen gases coming out of catalyst chamber are led to cooling pipes.

The reaction is reversible and exothermic in nature.

Catalysts such as iron oxide with small amounts of molybdenum are used to increase the rate of attainment of equilibrium. 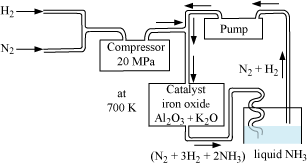 The produced ammonia gas is collected by either liquefaction as ammonia has higher boiling point than nitrogen and hydrogen hence, it condenses easily, or absorption in water as ammonia is highly soluble in water. The unused mixture of hydrogen and nitrogen gases are recompressed and then recycled into catalyst chamber.

1. It is a colourless non-poisonous gas with a characteristic pungent odour. It is lighter than air and extremely soluble in water because of hydrogen bonding.

2. It can be liquefied when cooled to 10 o C under pressure of 6 atm. It forms white crystals on cooling.

3. Ammonia has higher melting point and boiling point, latent heat of vaporisation or fusion because of its ability to form hydrogen bonding with itself. Since it has third highest electronegativity so it can form hydr…