Structure of an Atom

Dalton's Atomic Theory and Laws of Chemical Combination-Group A 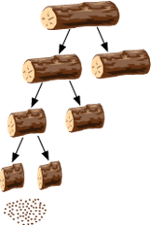 For example, if we keep chopping a log of wood into smaller and smaller pieces, then we will reach a point when the wood will not be divisible any further. Minute particles of wood will remain and these will not be visible to the naked eye. This is true for all forms of matter.The same was believed by the early Indian and Greek philosophers. In India, around 500 BC, an Indian philosopher named Maharishi Kanad called matter as padarth and these smallest particles (atoms) as ‘parmanu’. The word ‘atom’ is derived from the Greek word ‘atomos’ which means ‘indivisible’. It was the Greek philosopher Democritus who coined the term. However, for these ancient thinkers, the idea of the minute indivisible particle was a purely philosophical consideration.

By the end of the eighteenth century, scientists had begun to distinguish between elements and compounds. Two French chemists named Antoine Lavoisier and Joseph Proust observed that elements combine in definite proportions to form compounds. On the basis of this observation, each of them proposed an important law of chemical combination. The laws proposed by them helped Dalton formulate his atomic theory.

In the early nineteenth century, an English chemist named John Dalton proposed a theory about atoms. Known as ‘Dalton’s atomic theory’, it proved to be one of the most important theories of science. The various laws of chemical combination also supported Dalton’s theory. Dalton asserted that ‘atoms are the smallest particles of matter, which cannot be divided further’. He published his atomic theory in 1808 in his book A New System of Chemical Philosophy. The postulates of Dalton’s atomic theory are as follows: 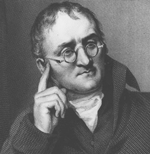 John Dalton (1766−1844) was born into the poor family of a weaver in Eaglesfield, England. He was colour-blind from childhood. He became a teacher when he was barely twelve years old. By the time he was nineteen, he had become the principal of a school. In 1793, Dalton left for Manchester to teach physics, chemistry and mathematics at a college. Elected a member of the Manchester Literary and Philosophy Society in 1794, he became its president in 1817 and remained in that position until his death. During his early career, he identified the hereditary nature of red−green colour blindness. In 1803, he postulated the law of partial pres…