At the beginning of the 19th century, compounds obtained from plants and animals were regarded as organic compounds.

Organic compounds that contain both hydrogen and carbon are called hydrocarbons. These are parent fundamental compounds.

Hydrocarbons are classified on the basis of their structure and bonding.

The given figure shows the classification of hydrocarbons. 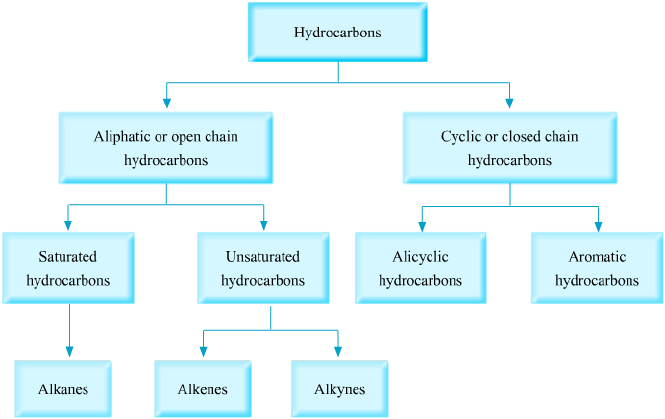 Open chain hydrocarbons - An open chain is an arrangement of atoms that does not form a ring, i.e. it has two open ends. It may consist of straight or branched chain compounds.

Their formula can be summarised as CnH2n+ 2, where n is the number of carbon atoms in the molecule.

1. Alkene: The alkene series consists of chain hydrocarbons that contain a double bond between two carbon atoms. The general formula for the series is CnH2n, where n is the number of carbon atoms.

2. Alkyne: Members of the alkyne series contain a triple bond between two carbon atoms in a molecule. Alkynes have the general formula CnH2n −2.

Closed Chain Hydrocarbons - The hydrocarbons which contain a closed chain of carbon atoms are called cyclic hydrocarbons. These compounds contain carbon atoms joined in the form of a ring. They are further sub-divided into two sub-groups.

(a) Alicyclic Hydrocarbons - These cyclic compounds contain single bonds. These are closed chain or cyclic compounds but they behave more like aliphatic or open chain compounds in spite of their rings.Upon cyclisation, an alkane hydrocarbon chain would result in the formation of alicyclic compounds.

Let us study about carbon and its bonding in its compound in more detail.

Carbon is a non-metal having the symbol ‘C’ and atomic number six. Since the atomic number of carbon is six, its electronic configuration is 2, 4. This means that carbon contains two electrons in K shell and 4 electrons in L shell (outermost shell). Hence, it has four electrons in its valence shell.

Since carbon has four electrons in its valence shell, it needs four more electrons to complete its octet. Therefore, it is a tetravalent element. 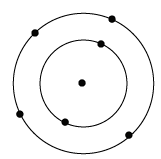 In order to complete its octet i.e., to attain its noble gas configuration and to stabilize itself, carbon can:

Therefore, carbon completes its octet by sharing its four electrons with the other carbon atoms or with atoms of other elements.

The bonds that are formed by sharing electrons are known as covalent bonds. Covalently bonded molecules have weak intermolecular forces, but intramolecular forces are strong.

Carbon has four valence electrons and needs four more electrons to complete its octet. Therefore, it is capable of bonding with four other atoms of carbon or atoms of other elements having a valency of 1.

For example, the molecule, methane can be formed with hydrogen (H) atoms that have only one electron in its K shell. To attain the noble gas configuration, it combines with four hydrogen atoms as shown in the figure.

Now, let us study the properties of carbon compounds.