Mechanism of heredity at cellular level

The heredity material in the form of DNA is present inside the nucleus of a cell. The segment of DNA, which gives information for synthesis of protein inside a cell, is called the gene of that protein. These proteins control all the characteristics of an organism.

We have already studied that in both plants and animals, growth or height of the body is controlled by hormones.

Formation of short and tall plants 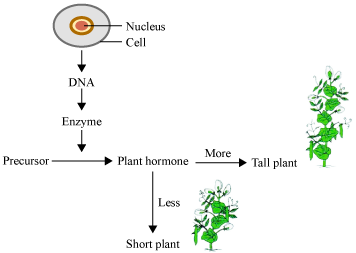 It is ultimately a gene that controls the amount of enzymes. If more enzymes are produced, then the plant grows taller.

If any variation or alternation in a gene occurs, then the enzyme produced is less efficient. Hence, the plant is short in height.

Sexual reproduction, as we know, involves the fusion of cells. As a result, the amount of DNA in the zygote doubles.

In order to maintain the amount of DNA, the fusing cells should contain half the amount of DNA, so that the resulting zygote has the same amount of DNA as the parent cell. Each cell in our body has two factors or genes for each characteristic (T or t) as separate independent pieces called chromosomes. Thus each cell will have two copies of each chromosome, one each from the male and female parents.

These chromosomes separate to form two gametes. Then, game…