Angles and Pairs of Angles

Identification of Regions and Points That Lie Inside, Outside, and On the Angles

Rohit and Mohit start walking from the same point in different directions. Let Rohit move towards Y and Mohit towards Z as shown below. 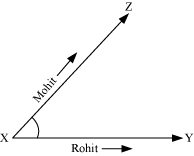 Here, we can say that the rays

, are known as the arms of ∠ZXY. The point, i.e. X, that is common to these arms is called the vertex of ∠ZXY.

Let us consider the following ∠CAB with some points P, Q, and R.

Let us shade the different parts of the angle as shown below. 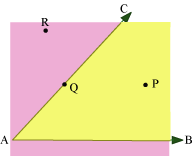 The boundary of ∠CAB is formed by its arms

Using this concept, we can say that an angle has three regions. They are interior region, exterior region, and boundary region. Using this idea, we can easily identify whether a point lies inside, outside, or on the given angle. Let us discuss one more example to understand the concept better.

In the figure given below, name the point or points that lie

(i) in the interior of the angle

(ii) in the exterior of the angle

(iii) on the angle 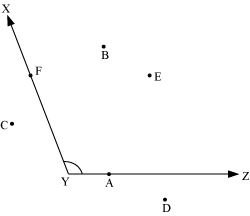 (i) Points B and E lie in the interior of the angle.

(ii) Points C and D lie in the exterior of the angle.

In some cases, pairs of angles show some special properties. Complementary and supplementary angles are examples of such pairs of angles, whose sum of measures exhibit a relationship. Go through the video to learn more about them.

So, the two important definitions of complementary and supplementary angles are as follows.

Let us solve some examples related to complementary and supplementary angles to understand the concept better.

Find the complement of the following angles.

Find the supplement of the following angles.

(i) The opposite angles of a square are complementary angles.

(i) False, as each angle of a square is a right angle.

An angle measures four times its supplementary angle. Find the measures of both the angles.