SIGNUP / LOGIN
You are here: Home / JEE / Articles / 90 Seats Less for IIT Aspirants as IIT Goa gets pulled off from JEE Advanced 2015

JEE Advanced 2015 candidates aspiring for admission to an IIT will have 90 fewer seats as the newly announced IIT Goa has had to opt out of the admission’s process due to the lack of a campus. The 90 seats – 30 each in the streams of electrical engineering, computer engineering and mechanical engineering – were initially on offer at IIT Goa for the academic year 2015-16.

IIT Bombay, which is supposed to mentor the IIT Goa for it’s initial few years, released a press release stating “The newly-announced Indian Institute of Technology in Goa will not be able to admit students for the 2015-16 academic session. Considering that the seat allocation process for admission to IITs is to commence shortly and the site for the permanent campus has not been finalized as yet, the government (at the Centre) has decided that the first academic session of IIT Goa will now commence from 2016-17.” 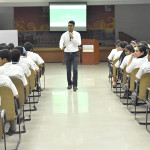