Union finance minister Nirmala Sitharaman presented the Union Budget 2021 in Parliament on Monday. This Budget has great significance as it has been announced amid the novel coronavirus pandemic, which has led to massive economic disruption in India. Talking about the Education sector – 100 new Sainik Schools are to be set up, 750 Eklavya schools to be set up in tribal areas, and a Central University to come up in Ladakh.

We, as common people, get affceted by the price of various commonly used items and commodities. Though there are a large number of items that might become expensive, there are a certain things that will become cheaper at the same time. Have a look: 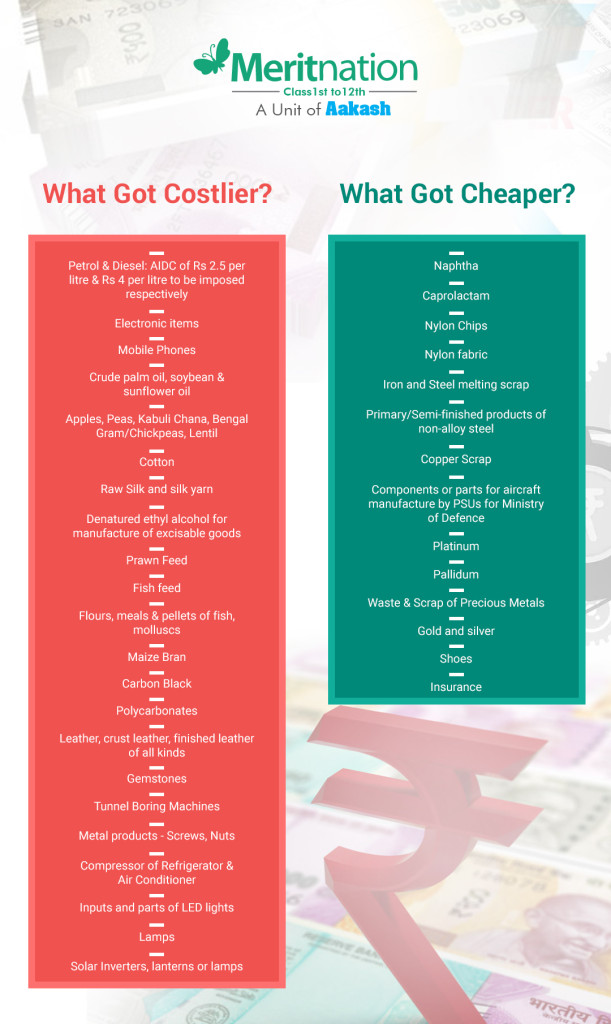 Following are some other sectors where the government has done some massive budget allocation:

Infrastructure
Under PM Atma Nirbhar Swasth Bharat Yojana the government will spend Rs. 64,180 crore on primary, secondary and tertiary healthcare over a period of 6 years.

Vaccine Manufacturing
Rs. 35,000 crores have been separately earmarked for COVID-19 vaccines.
Research & Development and Innovation
Incentives to pharma, healthcare technology and digital health boost to be focused upon.

Defence
Rs 4,79,196 crore has been allocated to the Ministry of Defence which is the highest till date.

Capital Expenditure
Rs. 1.35 lakh crore has been allotted to this section which relates to modernisation and infrastructure development of armed forces, it has been revised amidst the border tensions with China.

Roadways
The government has an outlay of ₹ 1.18 lakh crore for the Ministry of Road Transport and Highways, which will be utilized to further build highways across the country with a target to expand India’s highway network by 8500 km by March 2022 and complete an additional 11,000 km of the national corridor.

Railways
Rs. 1,10,055 crore are allocated to the Indian railways sector out of which ₹1.07 trillion will be utilized for capital expenditure for 2021-22 to expand rail infrastructure in India.

Urban Development
Rs. 2.87 lakh crore has been approved for the launch of the Jal Jeevan mission at 4,378 bodies as suggested by the UN.

Swachh Bharat Mission has been extended with an outlay of Rs. 1,41,678 crores for a period of 5 years.

Approval for setting up of 42 urban centres to tackle air pollution.

Approval for funds worth Rs. 18,000 crores to support public bus transport services and MetroLite & MetroNeo services in tier-2 and peripherals of tier-1 cities.

Insurance Act, 1938 to be amended to increase the FDI limit from 49% to 74% in insurance companies and allow foreign ownership and control with safeguard.

APMC and Infrastructure
Provision to Agriculture infrastructure fund outlay will be increased to Rs. 40,000 crore which was Rs. 30,000 crores earlier and the micro-irrigation corpus will be doubled to Rs. 10,000 crore and one thousand more mandis will be integrated with the electronic national market.