SIGNUP / LOGIN
You are here: Home / News / CBSE Board Exams 2017 / Choosing The Right Stream After Class 10 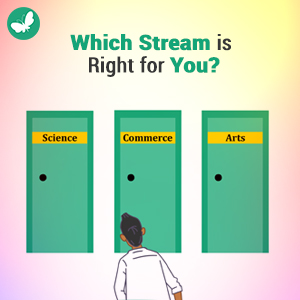 Along with the rejoicing that accompanies a 9 or 10 CGPAs in class 10th CBSE board results, there lies ahead a very important decision that all you students have to take i.e. the choice of stream for 11th and 12th class. This will not only define your  area of interest , but also play a key role in your career selection, later in life. Soaring  cut offs in Delhi University  these days makes it more important for the students to carefully choose their subjects in class 11th and 12th. And in order to make a right decision it’s important to have  information handy, which will help you go through the process of choosing the right subjects, much more systematically.

Relating the CBSE system with the Delhi University System

CBSE follows a system of  6 subject stream for  classes 11 and 12 [ 1 compulsory language (Core/Elective/Functional) + 3 core subjects + 1 optional subject + 1 additional subject ]. Most of the courses in Delhi University require a calculation of percentage of Best of Four subjects, but the selection of subjects varies from course to course. Here are some key points:

For choosing the right subjects in 11th and 12th, it’s important to decide the course one wants to pursue after school. This is important as Delhi University follows a policy of taking some particular subjects into consideration while calculating the Best of Four percentage and a  disadvantage of certain percentage is given if the required subject hasn’t been studied by the student or hasn’t been taken into account while calculating the Best of Four percentage.

Scenario 1:- in case of stream change (after passing 12th), disadvantage of maximum 5% may apply or

Scenario 2:- if a Candidate does not have language as a subject in class 12th and wants to seek admission in any hons. courses, he/she will suffer a disadvantage of 5% in ‘Best of Four’.

So even if a student has the required percentage for the cut off but doesn’t have the required subjects , he/she will be unable to choose the desired course.

The Concept Of ‘Best Of Four’ (BFS) Explained

Best of Four Calculation for Science and Humanities courses :-

All other subjects are non electives/vocational.

There are 2 Lists involved in this process :-

Ultimately, all what’s left to decide is which stream exactly to choose in 11th and 12th. As they famously say, “Don’t follow the crowd and be a mindless sheep, be different and pave your own way”. The best way to do that is by knowing where your interest and aptitude actually lies and what your aptitude levels are.

We at Meritnation can surely help you in taking this decision. All you’ve got to do is follow the link to check out the results of the Stream Selector.