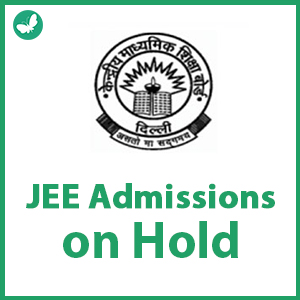 On Friday, the Supreme Court gave an order to halt admissions to engineering colleges based on the JEE Main & JEE Advanced 2017 results including admissions to IIITs, NITs and IITs. This decision was taken by the supreme court acting upon the petition filed by 2 IIT aspirants on the bonus marks issue. Further, the SC has also restrained the High Courts across the country from entertaining any writ petitions on this matter.

The paper checking committee of the IITs had awarded 18 bonus marks (7 marks in Paper 1 and 11 marks in Paper 2) to all candidates for the incorrect questions in the JEE Advanced 2017 exam. Two IIT aspirants decided to file a petition challenging the decision of the IIT checking committee to award bonus marks to all the candidates. According to them, bonus marks should not have been awarded to all the candidates but only to those who attempted the “incorrect question” in the paper. The petitioners also demanded that the counselling should be put on hold and a fresh merit list must be prepared.

JoSAA’s Take On This Decision

JoSAA (Joint Seat Allocation Authority)  justified the granting of bonus marks and called it the most practical solution to any dispute. But, the SC remained unconvinced. The order to freeze the counseling that is underway was made despite the IIT informing the SC that it was not possible to re-evaluate answer sheets of the estimated 2.5 lakh students who took the exams. JoSAA has already completed 2 rounds of 2017 counselling and has allotted seats to many engineering aspirants. However, JoSAA assured that they will act as per the directives of the Supreme Court.

This order will be affecting thousands of students who are seeking admission in IIT, NITs, IIITs and other engineering colleges in India which come under JEE. The SC hinted that it will be going by its 2005 verdict, according to which only those students who had at least attempted the incorrect question, would be awarded marks for it. The final decision is yet to be taken and until the final decision, the future of thousands of engineering aspirants lies in jeopardy.

Until then, Meritnation wishes all JEE 2017 aspirants, the very best! Let’s wait & watch and hope for the best!