SIGNUP / LOGIN
You are here: Home / Archives for JEE Results 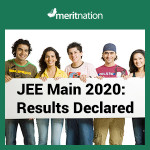 The Joint Entrance Exam (JEE) Main 2020 results have been released by the National Testing Agency on 11th September. Students can check their results here - https://jeemain.nta.nic.in/.  24 students have scored 100 percentile in the engineering entrance exam which was postponed twice in view of the COVID-19 pandemic. The exam was conducted from September 1 to 6, amid … END_OF_DOCUMENT_TOKEN_TO_BE_REPLACED

CBSE has declared the JEE Main cutoff for 2015 along with JEE Main 2015 Result declared on 27 May, 2015. The cutoff this year has been lower than those of previous years due to the higher difficulty level of JEE Main 2015 exam. For 2015, the cutoff for general category is 105 marks, while it was 115 in 2014. General category candidates scoring equal to or above this, will be … END_OF_DOCUMENT_TOKEN_TO_BE_REPLACED