Can i get a WELL LABELLED diagram of NUCLEUS_??

Kindly refer to the link given below to get your answer : 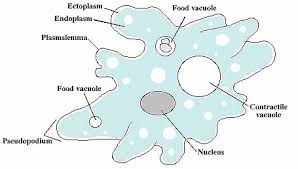 The nucleus is the largest cellular organelle in animals.[5] In mammalian cells, the average diameter of the nucleus is approximately 6 micrometers (μm), which occupies about 10% of the total cell volume.[6] The viscous liquid within it is called nucleoplasm, and is similar in composition to the cytosol found outside the nucleus.[7] It appears as a dense, roughly spherical organelle.

The outer envelope, otherwise known as nuclear membrane, consists of two cellular membranes, an inner and an outer membrane, arranged parallel to one another and separated by 10 to 50 nanometers (nm). The nuclear envelope completely encloses the nucleus and separates the cell's genetic material from the surrounding cytoplasm, serving as a barrier to prevent macromolecules from diffusing freely between the nucleoplasm and the cytoplasm.[8] The outer nuclear membrane is continuous with the membrane of therough endoplasmic reticulum (RER), and is similarly studded with ribosomes.[8] The space between the membranes is called the perinuclear space and is continuous with the RERlumen.

Nuclear pores, which provide aqueous channels through the envelope, are composed of multiple proteins, collectively referred to as nucleoporins. The pores are about 125 milliondaltons in molecular weight and consist of around 50 (in yeast) to several hundred proteins (in vertebrates).[5] The pores are 100 nm in total diameter; however, the gap through which molecules freely diffuse is only about 9 nm wide, due to the presence of regulatory systems within the center of the pore. This size allows the not-free passage of small water-soluble molecules while preventing larger molecules, such as nucleic acids and larger proteins, from inappropriately entering or exiting the nucleus. These large molecules must be actively transported into the nucleus instead. The nucleus of a typical mammalian cell will have about 3000 to 4000 pores throughout its envelope,[9] each of which contains a donut-shaped, eightfold-symmetric ring-shaped structure at a position where the inner and outer membranes fuse.[10] Attached to the ring is a structure called the nuclear basket that extends into the nucleoplasm, and a series of filamentous extensions that reach into the cytoplasm. Both structures serve to mediate binding to nuclear transport proteins.[5]

Most proteins, ribosomal subunits, and some DNAs are transported through the pore complexes in a process mediated by a family of transport factors known as karyopherins. Those karyopherins that mediate movement into the nucleus are also called importins, whereas those that mediate movement out of the nucleus are called exportins. Most karyopherins interact directly with their cargo, although some use adaptor proteins.[11] Steroid hormones such as cortisol and aldosterone, as well as other small lipid-soluble molecules involved in intercellular signaling, can diffuse through the cell membrane and into the cytoplasm, where they bind nuclear receptor proteins that are trafficked into the nucleus. There they serve as transcription factors when bound to theirligand; in the absence of ligand, many such receptors function as histone deacetylases that repress gene expression.[5]

kjigdrtdkhjuo
What are you looking for?