Dued idont think so that bane the computer

Computers , one of the most advanced electronics which have made outstanding effect on todays world . We can solve the toughest problems on it in just mere seconds . We can get all sorts of information  ; from an ant to the elephant . But everything that looks good ,doesnt always mean it is the best . We all agree to the fact that computers are a boon to the civilisation today , but they also have demerits

Computers as I have aldready mentioned have literally every little information that is necessary for todays world. Even our parents at times prefer to look up the computer than books to give us correct and distinct answers . Even teachers also use the Internet to give us worksheets or assigned work instead of distributing in class or making us write the paper . . We also have so many social networking sites which can be used to stay in touch with long lost friends . We have got a numerous number of apps and games to refresh our minds before again taking up another quota of long tiring work.

Suppose, you want to save a very important document . Now imagine the time that will be spent in taking a print of it and finding a file and then stapling it and on ..... But with computer , in  just two clicks and your file is safe and secure in the folder .  When you have to report to somebody ,or when you have to message , chat and talk to somebody , computers are brilliant devices for such purposes . But even beautifuland bright roses have sharp thorns .

Similarly  , computer may also become a bane instead of boon. When we are on various social networking sites , such as Orkut , Twiter and the most famous , Facebook , we loose track of time , our eyes become sore ,and we are deprived of the basic necessity to stay fit  : Exercise . When we sit on our computer chairs , we forget the world near us . We dont realise that what we are losing in the real world when we are trying our level best to create a top score in the games in the virtual world . It is just the way you usee the computer makes it a boon or bane

I wil say that..... Computer is a gud source for communication and education.. It has many positives and negetives.. Improbable to judge it..

IT HAS BOTH USES AND ABUSES , It is useful if limited to time but it also neglect our eyes.It is in our hands to use this device in beneficial manner or distractive manner.

wow such long answer expert have to give u thumps up

Computers can be either boon or bane . It depends more on the person  using it.

all above are correct

COMPUTER IS BOTH BOON AND BANE.

First of all, every company nowadays uses a computer to store its data and to make different kinds of operations. It is very difficult to imagine life without computers. A company would have had to store millions of papers and documents if there wouldn't have been any computer.
Computer has provided the greatest means of communication that is the Internet, an ever growing virtual world. I think it is the easiest and the cheapest way to get in touch with relatives, friends, business colleagues, etc. Nowadays, the world is becoming smaller and smaller.
To sum up, I believe that computers had made our lives much easier. They had changed our attitude towards life. I think with the invention of computers, people have become closer and more friendlier.

it just depends on the way you use it . if you use it for chatting or playing games its a bane . if you spend time with something like meritnation or other educational related its a boon. simple,very simple,just think,your brain is working.brainstrom it.

A computer as a boon-
1. A computer helps us to find information faster.
2. it helps us perform calculations that are beyond human capability.
3. A computer can perform multiple tasks at once.

A computer as a bane-
1. it can spoil our eyes.
2. Sometimes, our dependencies on a computer can grow to an extreme level.
3. Their responses are different from that of a human.

Firstly everything has two sides so according to me both

computer is bane or boon write a article in it

According to me the computer is boon to mankind. People are helpless without computer. Computer is the greatest invention on earth specially for students

Career building is the only goal of education

why market of the old kind of school must have fun

What characteristics does he say he inherited from his parents 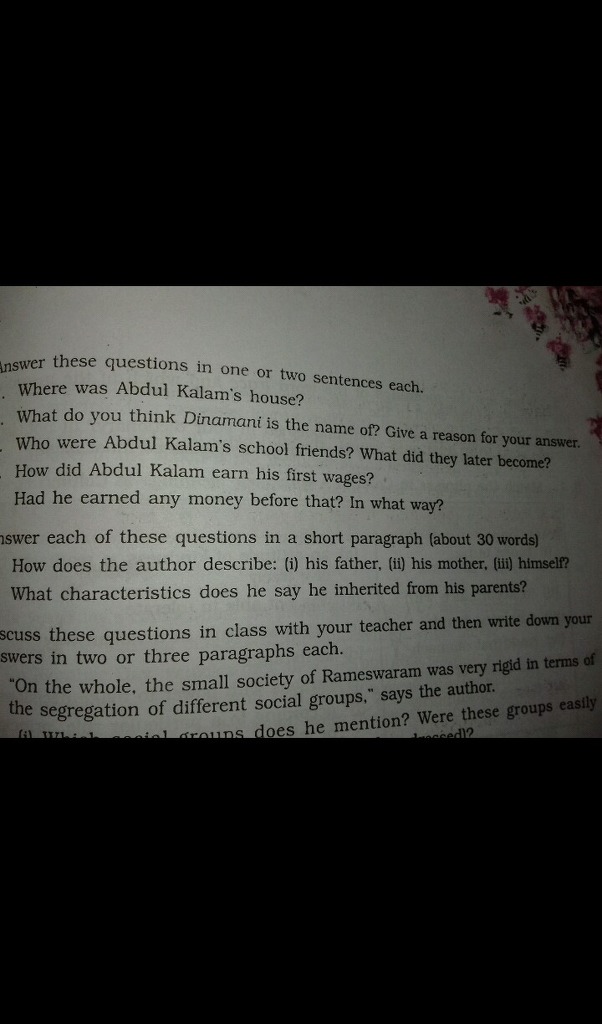 Short summary of my childhood....

The small society of Rameswaram was inflexible as far as ????..was concerned.