Post- fertilization events includes development of endosperm and embryo, and maturation of ovules into seeds and ovaries into fruits. 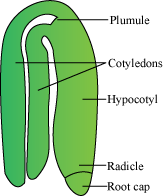