BOP:
1. If inflation is higher in country A than country B and the exchange rate between the two countries is fixed, what is likely to happen to the trade balance between countries?

2. In which circumstances will be the devaluation of our currency will be in favour for the economy?

3. In which circumstances the appreciation of domestic currency will be unfavourable for our economy?

4. Under which circumstances, the purchasing power of foreign currency increases in comparison to domestic currency?

BUDGET :
1. Define Surplus and Deficit budget. Under which situations deficit budget is beneficial for the economy?

3. How can surplus budget be used during inflation?

THEORY OF INCOME AND EMPLOYMENT:
1. Bring out the relationship between APC and MPC.

3. In India, people spend a high percentage of their income so that APC and MPC are high. Yet the value of Multiplier is low. Why?

BANKING AND MONEY:
1. What is Liquidity Trap?

2. Why is speculative demand for money inversely related to the rate of interest?

2. What is Factor market?

4. what is meant by Real Flow?

5. Why is change in stock considered to be a part of Final expenditure?

6. What do you mean by Effective Demand? How will you derive the Autonomous expenditure multiplier when price of final goods and the rate of interest are given?

Fiscal deficits are not necessarily inflationary. When the government expenditure increases and tax reduces, there is a government deficit and there will be a corresponding increase in the aggregate demand. However, the firms might not be able to meet the growing demands, forcing the price to rise. Hence fiscal deficits are inflationary in this sense.

But on the other hand, initially if the resources are underutilised (due to insufficient demand) and output is below full employment level, then with the increase in government expenditure, more factor resources will be employed to cater to the increasing demand without exerting much pressure on price to rise. In this situation, a high fiscal deficit is accompanied by high demand, greater output level and lesser inflationary situation. Hence, whether the fiscal deficits are inflationary or not depends on how close is the original output level to the full employment level.

3. The functioning of the multiplier process is based on the assumption that there exists excess capacity in the economy. Thus, when the aggregate demand increases, it leads to increase in production which in turn results in the increase in income or output. But in poor countries like India, production capacity is lacking. So, when the aggregate demand increases, it does not result in the increase in income or output because of the lack in production capacity. However, this increase in demand ultimately increase the prices or inflation in the economy. Hence, we can say that due to the above mentioned reason the value of the multiplier in poor countries is low.

Liquidity trap is a situation in which speculative demand function is infinitely elastic; it is explained as follows:

The price of a bond has an inverse relationship with the market interest rate. If the interest rate is very high and people expect it to fall in the future, then the bond prices will rise being inversely related to the interest rate. In order to earn capital gains in future, people will purchase bonds (as bonds are cheaper) and hence the speculative demand for money will become low. On the contrary, if the interest rate is low and people expect it to rise in future, then the bond prices will fall and in order to avoid capital loss, people will sell their bonds and convert their bonds into idle cash balances. Liquidity trap is an extreme case of the latter situation. When the interest rates are very low, then everyone expect interest rates to go up in future. Thus, to avoid capital loss, everybody prefers to maintain cash balance and not bond. Consequently, the speculative demand for money is infinitely elastic. In this situation, if the additional money is pumped into the economy, then, this will only satisfy the thirst for money, without increasing the demand for bonds. Pumping additional money in this situation will further exaggerate the condition as this will further reduce the interest rate below r min. 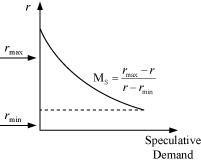 I want to make an humble request to you. As here in this thread, you have asked so many questions altogether. This makes our indexing mechanism inefficient. Thus, we hereby request you to ask a single question in a single thread. This will be highly beneficial for our other students to go through your questions. Please abide by this from the next time on.