pls ans the this question

2.define marginal revenue which concept of revenue is called price?

3.how can one obtain tvc from mc?

4.in case of aproduct like disel which sold by the governmentat a subsidised price,how can the government lower its losses without lowering the subsidy?

i. We know that Total Cost is the summation of Total Variable Cost and Total Fixed Cost. That is,

Total Cost Curve is parallel to Variable cost curve because of the fact that Total Fixed Cost remains constant throughout all levels of output. Thus, the vertical distance between TC and TVC is constant and is equal to TFC.

ii. Marginal Revenue is defined as the change in the total revenue due to sale of one more unit output. It is calculated by either of the two following ways.

MRn represents Marginal Revenue due to nth unit of output

It is the Average Revenue (i.e. the revenue earned per unit of output sold) that is the same as the price of product.

This is because of the fact that in the short run the fixed factor remains constant, so any additional increase in the cost should be on the cost on the employing an additional variable factor (or labour).

iv. To lower the the losses one of the ways can be to lower the demand for diesel by taking such measures as encouraging the fuel efficient engine vehicles. Another way to cover the losses can be by increasing the taxes.

It refers to the total cost of production that is incurred by a firm in the short run to carry out the production of goods and services. It is the aggregate of expenditure incurred on fixed factors as well as variable factors. Therefore, the total cost can be segmented into following two parts namely- TFC and TVC. That is, 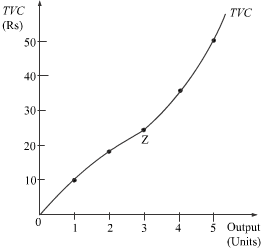 It is defined as the change in the total revenue due to sale of one more unit output. It is calculated by either of the two following ways.