WHAT IS ARITHMETIC MEAN

Arithmetic Mean is the mathematical term for "Average".

mean is the average of the given objects

guess me who am i

Mean is the average of given objects.

THE BRANCH OF MATHEMATICS DEALING WITH THE PRPERTIES AND MUNIPULATION OF NUMBERS.

Average set of numerical values is the meaning of arithmetic. 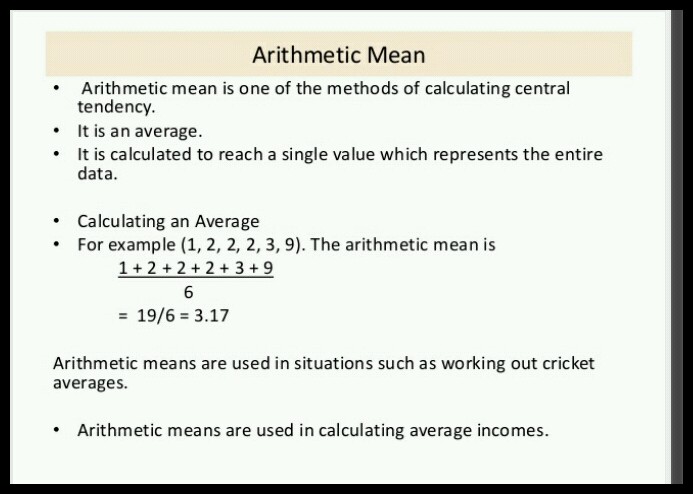 sum of all the observation

Arithmetic mean is value of numerical ,calculating them by adding & dividing them.

sum of data/organising of data

the average of a set of numerical values, as calculated by adding them together and dividing by the number of terms in the set.

mean is same as average.

One of the method of calculating trendency.

Hi meritnation team ! Can you please make answers for the MY ENGLISH FOLDER - CLASS 7  by the oxford university press ? If you can, it would be of great help .
Thank You,
Sanjay

Arithmetic means the sign of addition , multiplication, substraction and division

In mathematics and statistics, the arithmetic mean ( /ˌærɪθˈmɛtɪk ˈmiːn/, stress on third syllable of "arithmetic"), or simply the mean or average when the context is clear, is the sum of a collection of numbers divided by the count of numbers in the collection.[1] The collection is often a set of results of an experiment or an observational study, or frequently a set of results from a survey. The term "arithmetic mean" is preferred in some contexts in mathematics and statistics because it helps distinguish it from other means, such as the geometric mean and the harmonic mean.

In addition to mathematics and statistics, the arithmetic mean is used frequently in many diverse fields such as economics, anthropology, and history, and it is used in almost every academic field to some extent. For example, per capita income is the arithmetic average income of a nation's population.

While the arithmetic mean is often used to report central tendencies, it is not a robust statistic, meaning that it is greatly influenced by outliers (values that are very much larger or smaller than most of the values). Notably, for skewed distributions, such as the distribution of income for which a few people's incomes are substantially greater than most people's, the arithmetic mean may not coincide with one's notion of "middle", and robust statistics, such as the median, may be a better description of central tendency.

it is  very simple .
What are you looking for?