Cortex is the outer layer of tissue which lies immediately below the epidermis in both stems and roots. It is also called ground tisuue.
Protoderm also called as dermatogen is the thin layer of meristmatic tissue in the embryo which gives rise to the epidermis.
Leaf primordium is the lateral outgrowth of the apical meristm which develops into a leaf

Inbotany, thecortexis the outermost layer of thestemorrootof a plant, bounded on the outside by theepidermisand on the inside by theendodermis. It is composed mostly ofdifferentiated cells, usually large thin-walledparenchymacells of theground tissuesystem. The outer cortical cells often acquire irregularly thickened cell walls, and are called collenchyma cells. Some of the outer cortical cells may containchloroplasts. It is responsible for the transportation of materials into the central cylinder of the root through diffusion and may also be used for food storage in the form of starch.

(leaf primordia) Young leaves, recently formed by the shoot apical meristem, located at the tip of a shoot. 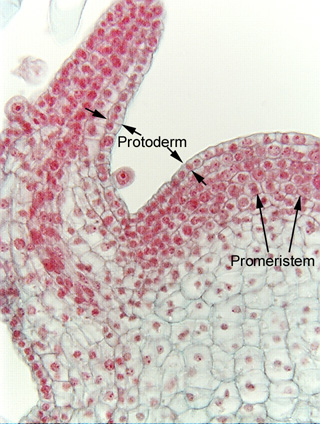 Longitudinal section of shoot tip of coleus (Coleus). Two types of meristem are present here, based on the types of tissues they produce. The outermost layer of cells across the top of the apical meristem and leaf primordium is a meristem called theprotoderm: its cells are still dividing and their progeny cells will develop into epidermis cells. The two cells bulging from the protoderm of the leaf primordium will develop into trichomes -- they are trichome initials, and they can also be called trichome meristemoids.

Look carefully at the center of the shoot apical meristem, at the cells just below the protoderm. They are slightly larger, slightly more irregular than the cells on the periphery of the meristem; as these central cells divide and enlarge, they push surrounding cells into the peripheral region. This push causes the cells to move from one part of the meristem to a different part, basically these central cells produce the cells for the rest of the meristem. Such a region is called apromeristem. The promeristem in this species is not particularly easy to see.