What is subject- verb agreement ?
And explain its all rule. Pls fast its urgent pls expert tell the ans of this que i need it now

Kindly find below the similar link to the asked query:- 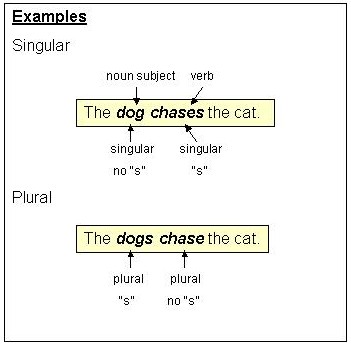 We will use the standard of underlining subjects and verbs.

Being able to find the right subject and verb will help you correct errors of subject-verb agreement.

Basic Rule. A singular subject (she, Bill, car) takes a singular verb (is, goes, shines), whereas a plural subject takes a plural verb.

Example: The list of items is/are on the desk.
If you know that list is the subject, then you will choose is for the verb.

Rule 1. A subject will come before a phrase beginning with of. This is a key rule for understanding subjects. The word of is the culprit in many, perhaps most, subject-verb mistakes.

Hasty writers, speakers, readers, and listeners might miss the all-too-common mistake in the following sentence:

Incorrect: A bouquet of yellow roses lend color and fragrance to the room.

Examples:
My aunt or my uncle is arriving by train today.
Neither Juan nor Carmen is available.
Either Kiana or Casey is helping today with stage decorations.

Rule 3. The verb in an or, either/or, or neither/nor sentence agrees with the noun or pronoun closest to it.

This rule can lead to bumps in the road. For example, if I is one of two (or more) subjects, it could lead to this odd sentence:

Awkward: Neither she, my friends, nor I am going to the festival.

If possible, it's best to reword such grammatically correct but awkward sentences.

Rule 4. As a general rule, use a plural verb with two or more subjects when they are connected by and.

Example: A car and a bike are my means of transportation.

But note these exceptions:

Exceptions:
Breaking and entering is against the law.
The bed and breakfast was charming.

In those sentences, breaking and entering and bed and breakfast are compound nouns.

Rule 5a. Sometimes the subject is separated from the verb by such words as along with, as well as, besides, not, etc. These words and phrases are not part of the subject. Ignore them and use a singular verb when the subject is singular.

Examples:
The politician, along with the newsmen, is expected shortly.
Excitement, as well as nervousness, is the cause of her shaking.

Rule 5b. Parentheses are not part of the subject.

Example: Joe (and his trusty mutt) was always welcome.

If this seems awkward, try rewriting the sentence.

Rule 6. In sentences beginning with here or there, the true subject follows the verb.

Examples:
There are four hurdles to jump.
There is a high hurdle to jump.
Here are the keys.

Rule 7. Use a singular verb with distances, periods of time, sums of money, etc., when considered as a unit.

Examples:
Three miles is too far to walk.
Five years is the maximum sentence for that offense.
Ten dollars is a high price to pay.
BUT
Ten dollars (i.e., dollar bills) were scattered on the floor.

Rule 8. With words that indicate portions—e.g., a lot, a majority, some, all—Rule 1 given earlier in this section is reversed, and we are guided by the noun after of. If the noun after of is singular, use a singular verb. If it is plural, use a plural verb.

Rule 9. With collective nouns such as group, jury, family, audience, population, the verb might be singular or plural, depending on the writer's intent.

Examples:
All of my family has arrived OR have arrived.
Most of the jury is here OR are here.
A third of the population was not in favor OR were not in favor of the bill.

Rule 10. The word were replaces was in sentences that express a wish or are contrary to fact:

Example: If Joe were here, you'd be sorry.

Shouldn't Joe be followed by was, not were, given that Joe is singular? But Joe isn't actually here, so we say were, not was. The sentence demonstrates the subjunctive mood, which is used to express things that are hypothetical, wishful, imaginary, or factually contradictory. The subjunctive mood pairs singular subjects with what we usually think of as plural verbs.

Examples:
I wish it were Friday.
She requested that he raise his hand.

In the first example, a wishful statement, not a fact, is being expressed; therefore, were, which we usually think of as a plural verb, is used with the singular subject I.

Normally, he raise would sound terrible to us. However, in the second example, where a request is being expressed, the subjunctive mood is correct.

Hope this answer was helpful.