Where are synaptic vessels found in human body.Name their chemical contents.what is the function of these chemicals.

Location and Function - ​​The electric signals are transmitted from one neuron to other across a synapse through the release of chemical molecules called neurotransmitters. The axon terminal of nerve fibres contain synaptic vesicles which are filled with neurotransmitters which are released in the gap called synapse. The released neurotransmitters reach to the succeeding neuron causing changes over there and start a similar electrical impulse in a dendrite of the next neuron or action in the muscle causing action.

Observe the flow diagram given below

It shows the propagation of nerve impulses from dendrite of one neuron to axon of the next.

It shows the location of synapse
↓ 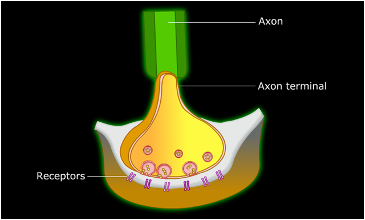 The diagram shows propagation of nerve impulses from one neuron to next and then from a neuron to muscle.

Hope this information will clear your doubts about the topic.