Why light bends towards the normal when it travels from rarer to denser medium. Explain with diagram.

When light travels from rarer to denser medium , the one which travels at an angle will slow down its velocity and changes its direction . The wave which is coming at perpendicular direction to the plane normal , changes its velocity but not direction. Now , we know λ (= v/f) , as  speed slows down then  λ  will become small if frequency has to be kept constant as shown in Fig. 1 .  Additionally, All the wave fronts are not reaching at same time  to the  boundary because they are coming at an angle . the one which reaches first will slow down its speed first i.e decreases its wavelength and at the same time others will travel with their own regular velocity. And  when will slow down their velocity when reaches to boundary. As the incoming  wave has the same wavelength through out . suddenly it changes at the boundary , in order to maintain same frequency it has to change its direction. so light bends. Now the rays  which is travelling at perpendicular direction to the boundary  has all the wave fronts reaching at same time, so they will only slows down their velocity but will not bend.
View Full Answer

This can be explained on the wave theory of light . Yov will understand it by a diagram

by theorem of light.

For illustration of the situation imagine the following scenario: 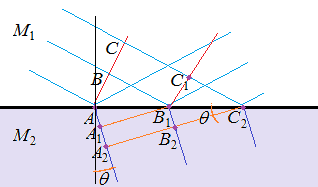 the distance that the wave can travel during the time  is smaller,

(hence the distance between two consecutive wave-fronts is smaller.)