A tornado is a local storm of short duration (usually 510 minutes) formed of winds rotating at very high speeds, usually in a counter-clockwise direction (in the Northern Hemisphere). This storm is visible as a vortex—a whirlpool structure of winds rotating about a hollow cavity in which centrifugal forces produce a partial vacuum. As condensation occurs around the vortex, a pale cloud appears—the familiar and frightening tornado funnel. Funnels usually appear as an extension of the dark, heavy cumulonimbus clouds of thunderstorms, and stretch downward toward the ground. Some never reach the surface; others touch and rise again. Air surrounding the funnel is also part of the tornado vortex. As the storm moves along the ground, this outer ring of rotating winds becomes dark with dust and debris, which may eventually darken the entire funnel.

These small, severe storms form several thousand feet above Earth's surface, usually during warm, humid, unsettled weather, and usually in conjunction with a severe thunderstorm. Sometimes a series of two or more tornadoes is associated with a parent thunderstorm. As the thunderstorm moves, tornadoes may form at intervals along its path, travel for a few miles, then dissipate. The forward speed of tornadoes has been observed to range from almost no motion to 70 mph.

A tornado is a special kind of storm. It is a whirling wind, circling around a low pressure centre. A tornado reaches from a cloud to the ground as a vertical, funnel-shaped column of air. A violent tornado can travel wiwth the speed of about 300 km/hour. Its diameter can be as small as a metre and large as a kilometre and even more wider. A tornado creates extensive damage whre it touches the grround. Tornadoes occur very rarely in our country but they are very common in the USA and Canada.

the tornado is twister

Tornado is a type of disaster like all in which the buildings houses animals and mens are harmed this is occur when the pressure of wind is very high.There are different types of air disasters like cyclone,strom,thunderstromand tornado.we always ready for like these tornado we don't know when it comes. 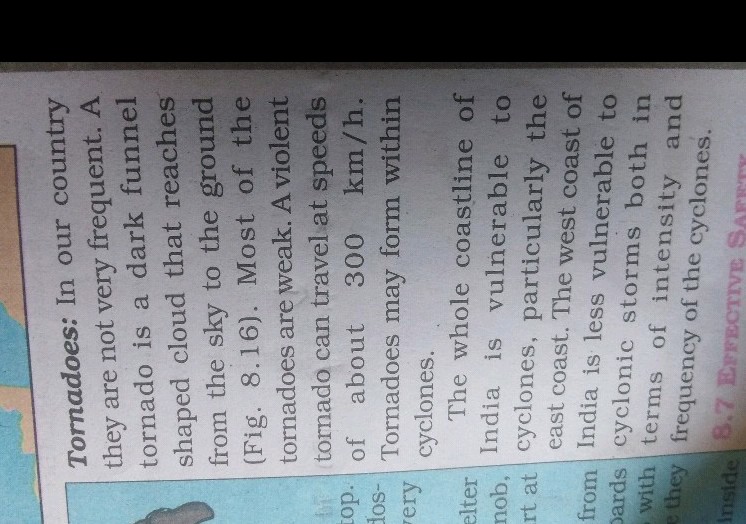 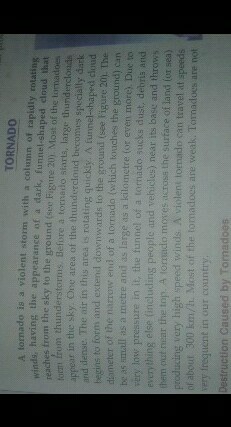 These things you have to do on your own

I don't know but what if you ask an adult like your parents.

A?tornado?is a violent rotating column of air extending from a thunderstorm to the ground. The most violent?tornadoes?are capable of tremendous destruction with wind speeds of up to 300 mph. They can destroy large buildings, uproot trees and hurl vehicles hundreds of yards. They can also drive straw into trees.

A tornado is a rapidly rotating column of air that is in contact with both the surface of the Earth and a cumulonimbus cloud or, in rare cases, the base of a cumulus cloud. Wikipedia

A tornado?is a violent rotating column of air extending from a thunderstorm to the ground. The most violent tornadoes?are capable of tremendous destruction with wind speeds of up to 300 mph. They can destroy large buildings, uproot trees and hurl vehicles hundreds of yards. They can also drive straw into trees.
What are you looking for?