Objectives
After going through this lesson, you should be able to understand the following concepts.

• Concept of Utility- Meaning and its Measurement

Human Wants
Human wants refer to the various desires or wishes whose fulfilment provides satisfaction to human beings. The basic nature of human wants is that they are unlimited. However, the resources to satisfy these wants are limited. Therefore, the wants that have to be fulfilled must be chosen ones.

The following diagram presents the basic characteristics of human wants. 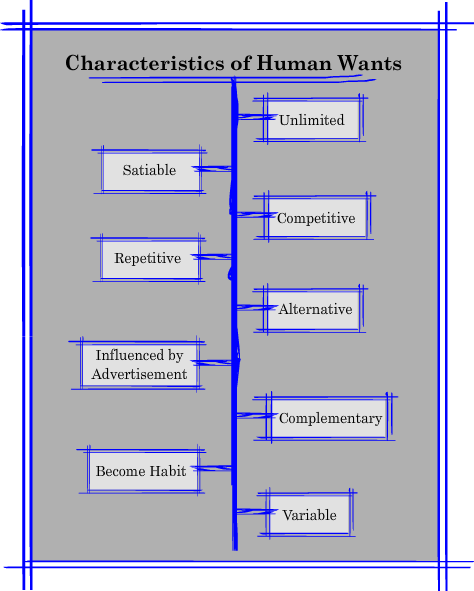 1. Unlimited: Human wants are unlimited in the sense that as one of the wants gets fulfilled, another emerges, and so on. Thus, human wants are never-ending.

2. Satiable: Every want can be satisfied by the use of resources.

3. Competitive: As the resources available to satisfy the wants are limited, a choice must be made among various wants. Thus, some of the wants would be fulfilled and some others would be ignored.

4. Repetitive: Some of the wants, such as that for food, clothing, etc. occur most often.

5. Alternative: There are several ways of satisfying a want. Depending on the availability of resources, a choice must be made regarding the means of fulfilment of wants.

7. Complementary: Some of the wants are complementary, i.e. they must be fulfilled together—for instance, the want for a pen and ink.

8. Become habits: Some of the wants if satisfied regularly become a habit, for instance, watching television shows, smoking, etc.

1. Necessaries: Necessaries refer to the primary needs that every individual requires for living. Such wants can be further classified into the following three categories.

a. Necessities of existence: It refer to the wants that are required for sustaining life, for example, food, clothing and shelter.

c. Conventional necessaries: These wants arise out of customs and traditions of society. For instance, lighting earthen lamps during Diwali is a necessity that arises out of religious customs. 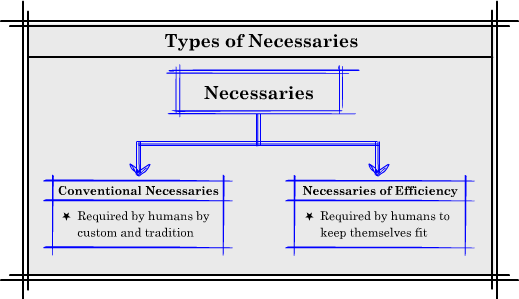 2. Comforts: These are the goods that are required for comfortable and happy living. They make life comfortable. For example, bed, refrigerator, etc. These wants lie somewhere in between necessities and luxuries wants.

3. Luxuries: These goods are not essential for living but are rather required for pleasure. Generally, these goods are expensive. Moreover, they are often used to improve one’s social status or prestige. For instance, luxury cars and designer clothes.

The following table summarises the three types of human wants.

To summarise we can say that human wants arise due to elementary causes (necessaries) and due to psychological causes (comforts and luxuries).

Utility refers to the satisfaction that a consumer expects to derive from the consumption of a particular good. In other words, it refers to the want satisfying power of a commodity. It must be noted that utility is…