INDEX NUMBERS
Definition : Index Numbers are used to measure the change in some quantity which we cannot observe directly.

From the given definition, the following features of index numbers can be derived. 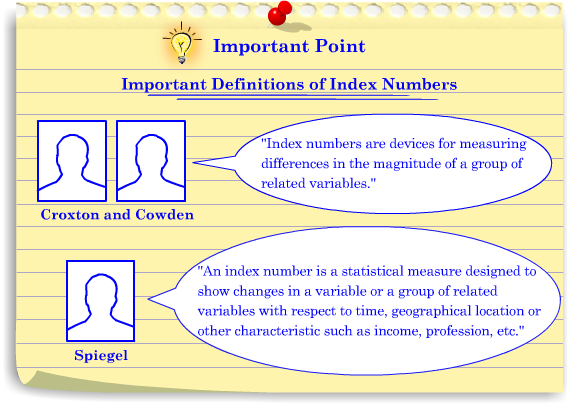 4)  Index numbers are used to measure the changes in prices in the group of items but the changes in the quantity of agricultural production, imports, and exports can also be measured through index numbers. Hence, they act as a Universal Utility.

i. Price Index: Price index is an index that measures overall changes in the price levels of a commodity in the economy between two periods. These prices can either be retail or wholesale.

The following note describes the two types of index numbers. 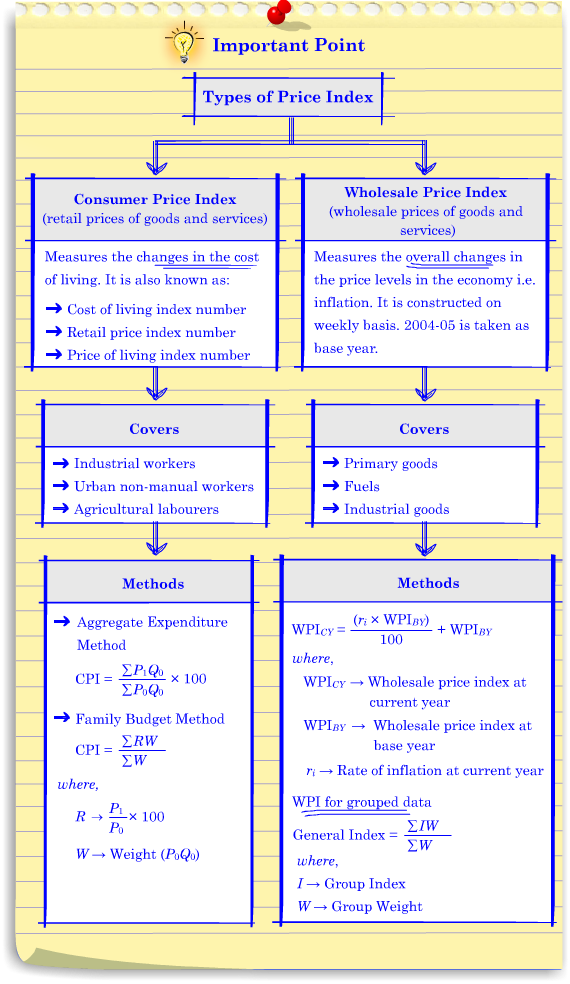 ii. Quantity Index: It measures overall changes in the physical quantity of  goods produced, consumed or sold in the economy between two periods. This index helps in taking production decisions. It is periodically used for the commodities that are subject to price variations.


iii. Value Index: It facilitates comparison of the total value produced (Price  Quantity) in the current year with that produced in the base year.


iv. Specific Index: It includes all those indices that are computed by various researchers, industrial units, etc. in order to get some specific or purposive information. For instance, the index of industrial production, index used for tracking the commercial efficiency, index for job opportunities in different geographical areas over two period of time are some of the specific indices. These are also known as special purpose index numbers.
The following is a brief explanation of the Index of Industrial Production. 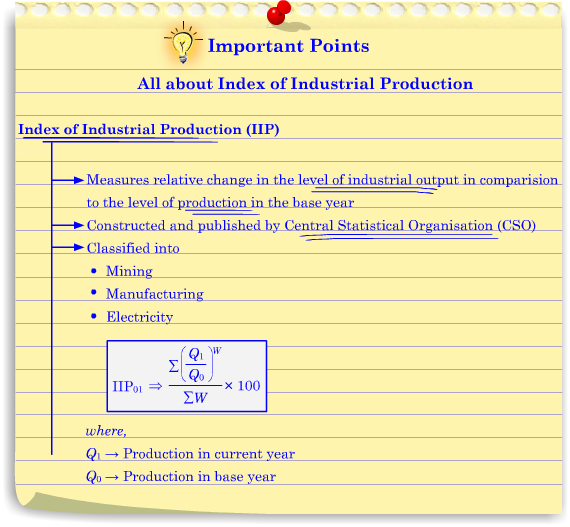 Difficulties in the Construction of Index Numbers

1. Objective: Different index numbers serve different objectives. Thus, based on the purpose of a study, an appropriate index number is chosen. For example, if we have to study the changes in the cost of living, we will construct a consumer price Index.

2. Base period selection: Base year refers to the year against which the values of a variable (such as price, wages, quantity) in the current year are compared. While constructing an index number, it is necessary to choose an appropriate base year, as it serves as the reference year for analysing changes in the variable.

A base year should have the following features.
i. The base year should be neither less than a month nor longer than a year.
ii. It should be neither too close nor too far from the current year. Too far a base year would not track the various changes (such as changes in the taste and preferences, habits and customs) that might take place in the course of time. Similarly, too near a base year would measure only slight changes in the variable in the two periods.
iii. It should also be normal and free from any kind of abnormalities or fluctuations such as natural calamities and business cycles.

Note: The index number for a base year is always equal to 100.

3. Item selection: Index numbers are generally constructed with respect to a variable. However, it is important to decide the appropriate unit of the variable involved. For example, while constructing the price index, whether retail price or wholesale price should be used or not depends on the objective or the purpose. Emphasis should also be laid on deciding the time period to be considered for these prices. In practice, an average of price for a specific period is usually preferred.

4. Reliable source of data: For the construction of suitable index numbers, the source from which data is collected also plays an important role. The data must be collected from a reliable source so that it is accurate and helps to derive significant conclusions.

5. Choice of an average: An index number involves the use of any average such as mean, median or mode. However, median and mode are found unsuitable for deriving meaningful conclusions. Theoretically, geometric mean is considered a better measure of averaging relatives, whereas, in practice, arithmetic mean is widely used due to its simplicity.

6. Suitable weighting system: It is necessary to assign suitable weights to different items in an index as per their relative importance in the index. For example, while constructing the consumer price index, more weight is given to food crops like wheat, rice, etc. rather than tea, coffee, etc.

7. Suitable method: There are numerous methods for calculating index numbers such as the aggregative method and the price relative method. Similarly, for the calculation …