Let us look at the following solid figures.

Is there any similarity between the given solid figures?

All of the above solid figures are made up of polygonal regions, lines and points. There is no curved surface in the given figures. Such solids are called polyhedrons.

Hence, a polyhedron (plural polyhedra or polyhedrons) can be defined as a geometric object with flat faces and straight edges.

Polyhedra are named according to the number of faces. For example: tetrahedron (4 faces), pentahedron (5 faces), hexahedron (6 faces) and so on. The first figure is the figure of a tetrahedron. The second figure is an octahedron.

Now, what can we say about the solids like cylinders, cones, spheres etc.?

We can classify polyhedrons into different categories. Let us discuss them one by one.

A polyhedron may be a regular or an irregular polyhedron.

A polyhedron is said to be regular if it satisfies two conditions which are given as follows.

(a) Its faces are made up of regular polygons.

(b) The same number of faces meets at each vertex.

If the polyhedron does not satisfy any one or both of the above conditions, then we can say that the polyhedron is irregular. To understand this concept, let us consider two solids, i.e. a cube and a hexahedron, as shown below.

Here, we can see that the faces of the cube are congruent regular polygons (i.e. all the faces are squares of same dimension) and each vertex is formed by the same number of faces i.e. 3 faces. Therefore, a cube is a regular polyhedron.

There are only five types of regular polyhedra. They are given below. 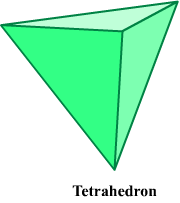 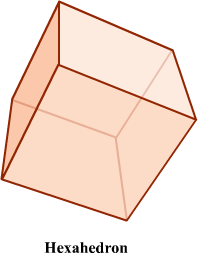 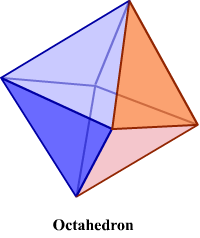 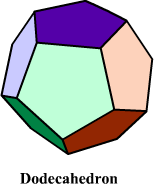 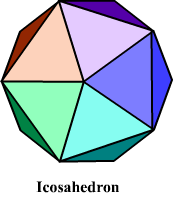 These five polyhedra are known as ‘Platonic Solids’.

The polyhedron may be a concave or a convex polyhedron.

It can be understood easily by taking two solids, i.e. a cube and the star shaped polyhed…