You must have noticed workers loading a truck or heavy loads up the building. Do you know what makes their works simpler?

A device that helps us lift heavy loads, change the speed of the motion or change the direction of a force is known as a simple machine. Simple machines are the tools that help people work faster and better.

There are various simple machines around us used for various purposes. Let us look at some of them. 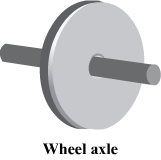 We will be further discussing them in detail.

A lever is a simple machine. It consists of a rigid bar, which is capable of turning around a pivot, which is also called a fulcrum. Generally, we use a rod, which can rotate freely about the fulcrum.

For lever, we generally use two more terms apart from the general terms used for all the machines.

The working of all levers is based on a common principle, which is called principle of lever.

If we rearrange the equation, we obtain

Therefore, the mechanical advantage of a lever is nothing but the ratio of the length of its effort arm to the load arm.

Levers are classified into three types depending upon the positions of load, fulcrum, and effort.

When the fulcrum is situated between load and effort, we call it a lever of first order. For example, beam balance, a crowbar, a seesaw.

Mechanical advantage of a lever of first order