Triangles and their Attributes

The students of class VII were being taken to a tour to Corbett National Park. They stayed there in a tent. The entrance in the tent was of a triangular shape as shown in the following figure.

Now can you tell what the height of the tent is?

As we can see in the above figure, the height of the tent is the length of the vertical pole which is standing in the centre of the tent.

Similarly, in any triangle, we can draw a perpendicular which represents its height. The perpendicular representing the height of a triangle is called the altitude of the triangle.

Look at the triangle PQR below. 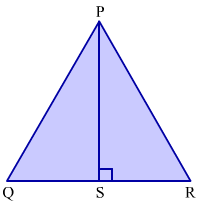 Here, P is a vertex of ΔPQR and

is the opposite side of the vertex P.

is a perpendicular drawn from P to

is called the height or altitude of the triangle.

An altitude can be defined as follows.

Note: A triangle can have three altitudes. 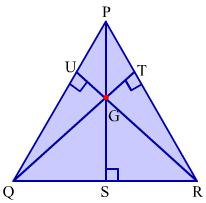 In the above figure,

are the three altitudes of ΔPQR.

"The point of intersection of the altitudes is called the orthocentre of the triangle."

Construction of Altitudes of a triangle
I. Using set-square
1. Draw a PQR. 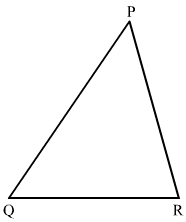 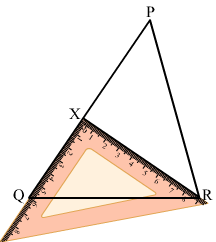 3. In a similar way construct the altitude from point P to side QR and from side Q to line PR.
Thus, the altitudes obtained are XR, QZ and PY. 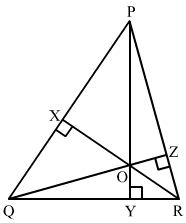 II. Using Compasses
1. Draw a PQR.
2. With P as centre, draw an arc on line QR cutting it at points A and B.
3. With A and B as centres, draw two intersecting arcs at points X and Y. Draw a line joining XY cutting the line QR at point M. Join PM. 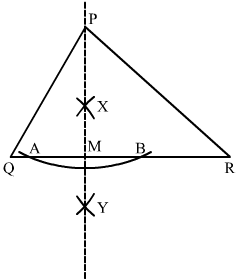 4. With Q as centre draw an arc on side RP extended to cut it at points C and D. With C and D as centres, draw two intersecting arcs. Let this line intersect PR at point N. Join QN. 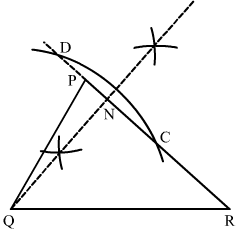 5. Similarly, draw altitude from point R on PQ cutting the line PQ at point L.
6. Join PM, RL and QN and name the meeting point of these three altitudes as O. 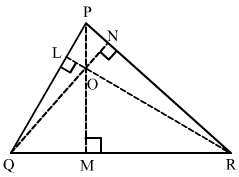 O is called the orthocentre of the PQR.

The altitudes of a triangle may not always lie inside it.

In an obtuse-angled triangle, the altitude drawn from the vertex of an acute angle lies outside the triangle. In this case, we have to extend the opposite side of the vertex from which the altitude is drawn. 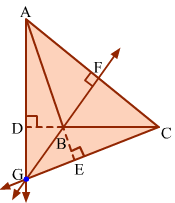 is the altitude drawn from the vertex C to extended side

is the altitude drawn from B to

Now, observe the altitudes drawn in the triangles ΔPQR and ΔABC.

It can be seen that altitudes in each triangle intersect each other at a common point.

Thus, altitudes of a triangle are concurrent.

In  ΔPQR and ΔABC, G is the point of concurrence.

Let us look at another example now.

. Are the median and the altitude drawn from A to 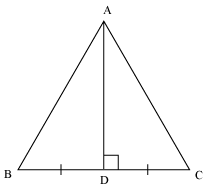 is an altitude of ΔABC drawn from the vertex A to

is a median of ΔABC drawn from the vertex A to

Thus, the altitude and the median drawn from A to

Suppose if someone asks us to draw a triangle. The first question that strikes us is that what are the lengths of the sides of the triangle which is to be drawn?

Therefore, if the three sides of a triangle are given to us, then can we draw the triangle?

In these figures, we can see that a triangle is not formed.

Thus, we cannot draw a triangle only with the help of a ruler, but by using the ruler and compass.

Now, let us see the construction of a triangle using ruler and compass.

Before constructing a triangle, we should check whether the triangle is possible with the given sides or not.

i.e., the sum of the lengths of two sides is less than the length of the third side.

Therefore, we cannot draw a triangle with sides of given lengths.

Let us solve some examples based on the construction of triangles.

Construct an isosceles triangle such that the two equal sides are of lengths 9 cm each and the unequal side is of length 4 cm.

Firstly, we draw a line-segment

of length 4 cm using a ruler.

Then using compass, we draw an arc of radius 9 cm taking L as the centre.

Again, taking M as the centre, we draw another arc of radius 9 cm. Now, both the arcs intersect each other at a point N. 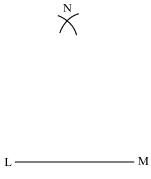 Now, we join the line segments 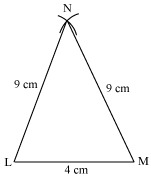