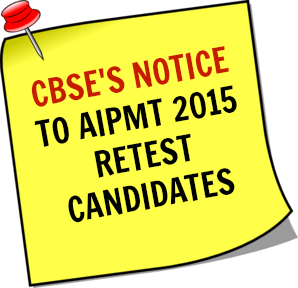 The Central Board of Secondary Education (CBSE) has released the Answer Key of AIPMT 2015 retest which was held on 25th June, 2015. The board has also put the OMR Answer Sheets and Responses on display on their official site. The candidates can check and download the AIPMT 2015 Retest Answer Key prepared by CBSE and the scanned images of their OMR Answer Sheet by logging to their account through their user ID (Registration No.) and password.

Candidates who wish to challenge the Answer Key released by the CBSE, may do so by paying Rs. 1000/-per response as per the guidelines given on the Information Bulletin – 2015 available on the AIPMT website. Offline requests and requests after the due dates will not be entertained by the CBSE. All decisions of CBSE will be final in this matter.

Candidates may look into the official AIPMT site to refer to the user manual i.e. www.aipmt.nic.in