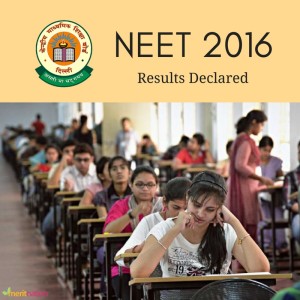 The Central Board of Secondary Education (CBSE) announced the 2016 AIPMT (now NEET) I and II results on their official website. The National Eligibility-cum-Entrance Test (NEET) under the directives of the Hon’ble Supreme Court of India was held on 1 May, 2016 and 24 July, 2016, for admission to undergraduate medical and dental courses.

Girls outnumbered boys in qualifying the NEET as per the results declared by the CBSE, even though there were 11,058 males compared with 8,266 female applicants in the top 15 per cent.

According to the data released by the CBSE, of the 8,02,594 registered candidates, 7,31,223 appeared for the examination.

The CBSE also released a list of top performing candidates as per which Het Shah secured the first rank scoring 685 marks out of 720, while Ekansh Goyal (682) came second and Nikhil Bajiya (678) stood third.

The counselling for seats in medical and dental colleges is expected to begin soon.